Taking improv to the next level with a roll of the dice, the cast and crew of “Dungeon & Dragons: Live!” performed this past Friday to two sold-out audiences.

The directors, theater senior majors Brandon Castillo, Ellorah Mead, and Andrew Snellen, put together the show as a senior project for the Theatre and Dance department. The popular tabletop role-playing game “Dungeon & Dragons (D&D)” was merged with improv to portray the hilarious chaos of playing D&D with friends.

To start, five characters, dressed in average college garb, t-shirts and flannels. They took to the stage and sat themselves around a table, which was a raised platform against the back of center stage. Referred to as “Players” in the program, Mead, along with Tyler Conklin, John Hager, and Cole Caposino, were regular humans playing D&D in the basement of their friend and Dungeon Master (DM), Sean O’Malley’s house. The whole show pivoted around this framing device. For one, it allowed O’Malley to explain the basic mechanics of the game to unfamiliar audience members by explaining the rules to the Players.

The frame of friends playing D&D also illustrated how the sessions come to life, quite literally. While the Players and DM played at their table, actors dressed as elves, half orcs, warriors, and other fantasy folks acted out their game on the stage. The costumes, with cloaks and swords, looked ready for the Renaissance Faire. While a student production budget only allowed for the minimum set and props, the cast took it as a chance for a laugh. At one point, the main characters rode in on invisible horses, Monty Python style.

Each Player controlled a character, all of whom were provided with hilariously tragic backstories. There was Chlo Moss (Marissa Considine), a half orc paladin who follows the Turtle Goddess Frankline and her four holy warriors, Leonardo, Donatello, Michelangelo, and Raphael. Chlo vowed to slay all lumberjacks after they murdered her adoptive family of turtles. There was also Edwad, played by Brandon Castillo, turned chicken rights activist and assassin after his father slaughtered his pet chicken Pepe. The party was rounded out by the entertainer turned barbarian named Bear, played by Andrew Snellen, and the sexy, seducing bard named Finch Farter, played by Alex Brown. The ridiculous characters would be a hard sell if it wasn’t for the dramatic delivery by their actors.

Having college students behind the characters created room for humor as the production didn’t take itself too seriously. The show was filled with hilarious moments, like an impromptu Bard-Off featuring a bandit, played by Laura Foley, performing the penny whistle solo from “My Heart Will Go On.” The song elicited groans, gasps and laughs from the audience. The lighthearted, sometimes raunchy fun gave the show the feel of a real D&D game, not to mention the real-life dynamic of players and DMs. In addition to the exchanged banter between themselves, the Players often made their characters take ridiculous actions to frustrate the DM. Playing into the mockery, O’Malley banged his head against the table and screamed in frustration when the Players derailed the story, like when Bear decided to perform a mating ritual for no reason. At times, the Players got far enough off track and talked over each other enough. It was easy to forget what quest they were on, but the DM always brought them back to the story at hand.

The mechanics of D&D raised the stakes of the show. The Players and DM used real dice, and stoic orc Rollgarth, played by Nathan Benson, would offer audience members the chance to roll a beach ball sized 20-sided die. The consequences were real. A series of bad rolls landed every party member under rocks in a canyon, aside from Bear, who felt left out and placed himself under a rock purposefully.

Comical, outrageous, nostalgic and unpredictable, “Dungeon & Dragons: Live!” touched on all the great things about playing D&D in your mom’s basement. As long as you’re laughing, you’re doing it right. 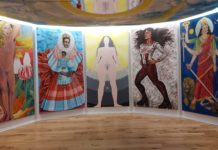 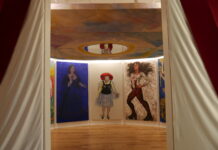