The first Profs Spotlight of the spring semester took place this past Monday. For the first time, the event was conducted in an open-mic style, rather than requiring sign-ups in advance. This format led to a couple acts returning to the stage for second performances and more acts overall.

The first performer of the evening was Ceara Regan, a junior theater major who moved to New Jersey from Georgia. Regan performed the song “Never Enough” from the film “The Greatest Showman.” Though her voice was strained from sickness, she gave a powerful performance.

“I didn’t realize there was one of these things going on and it’s my New Year’s resolution to do one of these [open-mics] every time they come up,” Regan said. “I actually am very well-trained. Tonight doesn’t show it because I’m really sick. I’ve been classically trained because I’m a musical theater major, but my voice is shot today.”

Next was Tom Vancak, a freshman sociology major, who performed solo with his acoustic guitar. Vancak performed “I Was a Cage” by Right Away, Great Captain!, “Slip Through my Hands” by The Parlor Mob and finished up with “Wonderwall” by Oasis.

“One of my buddies that I used to play guitar with knows the drummer and the guitarist from Parlor Mob,” Vancak said. “He’s played with them before. Through him, I found them, and he made me cover a bunch of their songs. For some reason I really liked that song.”

Returning to Profs Spotlight was Nate Cochran, a senior management information systems major. He performed “Who I’d Be” from “Shrek: The Musical” and “Corner of the Sky” from the musical “Pippin.” Able to project his voice skillfully, Cochran was one of the standout acts of the night.

Next, sophomore education major Connor Buckmaster performed two cover songs and one original. He sang “Feeling Whitney” by Post Malone, “Death of a Bachelor” by Panic! at the Disco and an original, titled “Perfect.”

Following him, Dan Kee, a junior marketing major, performed all original songs from his band, Green Knuckle Material. Three of his songs, “Isolate”, “How I Love” and “La La Love” are set to be released in coming months on a new extended play (EP). His final tune, “Lullaby,” is currently available on Spotify.

After a brief mini game of “Extreme Rock, Paper, Scissors,” Tom Vancak returned to the stage again to perform “Can’t Help Falling in Love,” originally by Elvis Presley and more recently made popular by Twenty One Pilots. He also performed “White Blank Page” and “I Will Wait for You” by Mumford and Sons.

Next, one of the former hosts of Profs Spotlight from last semester, Devin Dyer, a junior music industry and business major, took the opportunity to put herself in a performer’s shoes. She took the stage with her acoustic guitar and performed “Angela” by The Lumineers and “Toxic” by Britney Spears.

“I’ve never played guitar and sang, like together before,” Dyer said. “I usually have my friend play guitar.”

Next, Nate Cochran sang one last song for the audience, “Not Over You” by Gavin DeGraw.

“What I like about it is that it’s written by Ryan Tedder from One Republic,” Cochran said.

The final act of the night, Joon Daniele Kim, a radio, television and film major, performed two covers and an original. Kim, with an acoustic guitar he borrowed from Devin Dyer, sang “El Scorcho” by Weezer, his original song “Bitter Sweet Goodbyes” and ended the evening with “Creep” by Radiohead. Kim’s band, Sunshine Bloodline, placed third in Rowan’s Battle of the Bands.

“To the person who let me borrow their guitar, I tuned it a half step down, so, you’ll have to deal with that later,” Kim said. “To the person who went up last, you were in my ethics class, that’s cool. And to Jersey Mike’s, I’m Joon. If you have my sandwich, I’m right here.”

The next Profs Spotlight will be held Monday, Mar. 5, at Profs Place at 9 p.m. 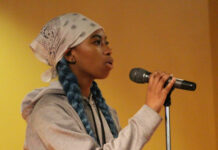 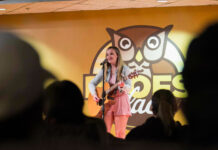 Magic and music come together at Profs Spotlight 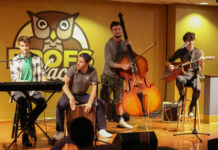