The first round of ACHA computerized rankings were released before Rowan’s bye week.

Over the course of their week off, they climbed three spots.

After being placed at no. 8 in the initial release of the rankings, the Profs were bumped up to no. 5 in the Southeast region while resting at home with a 6-6 record.

Their next opponent never had to worry about a rankings change, as the Penn State Ice Lions, who sat at the top at no. 1, awaited Rowan to arrive at State College on Friday night.

The Profs couldn’t keep up with the top ranked team in the region as they dropped the contest 4-1.

Rowan went down 3-0 before Frank Steffe got Rowan on the board. Steffe was assisted by Christopher McDermott and Frank Ferrante on the goal. Steffe’s score was the only one they would muster against Ice Lions goalie Jack Breen, who made 21 saves on 22 shots.

In net for Rowan was the same man who has minded the blue paint all season for the Profs, Justin Natiello, who was busy stopping 49 of the 53 shots he faced.

Head coach John Caulfield is a preacher when it comes to telling his squad to stay out of the penalty box.

By the end of the first period, Rowan had accrued three penalties, and ended the night with five penalties total.

Despite the now 6-7 record, the Profs still sit at no. 5, mostly due in part to the goal differential in their losses, especially their one goal defeat to Penn State at home a few weeks ago.

Rowan will enjoy Thanksgiving and more time off before hitting the ice at Hollydell once again, this time on Saturday Dec. 2nd at 8:15 p.m against no. 8 Rider University.

For questions/comments about this story, email sports@thewhitonline.com or tweet @TheWhitOnline. 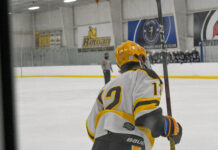 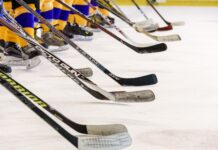 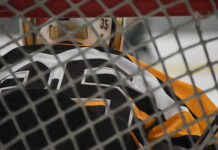