On Tuesday night, Rowan Women’s Chorus (WOCHO) and the Statesmen Men’s Chorus came together for a dual concert to show off their talents.

The female choir started the show off performing “Ergen Dead” by Peter Lyondev. They then performed numerous songs showing off their talents. One of their songs they played was “Kyire” by Antonio Valvaldi. This song was written for an orphanage of women who had spent the majority of their lives practicing music. Vivaldi wanted to show off the girls and express the strength of women. It was a song written specifically for women, which was very powerful during this time period when women’s rights were still in the distant future.

“I just love singing,” said Katie Allen, a junior psychology major. “I have been singing since high school, which got me into the women’s choir. I have been in it for two semesters and think we are doing really great.”

Towards the end of the performance, the group performed Ysaye Barnwell’s “On Children.” This song was written to show what it means to raise a child. It also conveyed how children form into their own selves, with separate ideas and thoughts compared to their parents.

“I have been singing since the fourth grade and when I came to Rowan I knew I wanted to sing with our amazing staff here,” said Vittoria Baccari, a music education with vocal concentration major and a soprano two singer with the chorus. “This will be my fifth semester, but everything is kind of new because we have a new conductor this year and everything is going as smoothly as possible.”

After the short intermission, the Statesmen choir began their set. They started off their set singing “Zions Walls,” adapted by Aaron Copland and Glenn Koponen.

One of their songs was written by Samuel Barber, called “Stopwatch and an Ordnance Map.” The song’s tale takes place during the Spanish Civil War, where two comrades are out on patrol and one of them is struck dead. He was hit by a bullet underneath an olive tree, which is ironic because olive trees are associated with peace.

Their next song was called “Harriet Tubman” by Eloise Greenfield and Rollo Dilworth, which showed the titular figure’s greatest feats as a slave. This was followed by a comedic relief act that involved pirates. Director of Choral Activities, Dr. Christopher Thomas, was called up on stage and did a pirate themed song that involved plastic pirate swords and eye patches. They sang about wanting to steal money from the Bursar’s office and giving Dr. Thomas all sorts of instruments to fulfill this “plan.”

The grand finale saw both groups come together on stage to sing “Angels from the Realms of Glory” by Dan Forrest.

Aldana Munoz, a senior biology major, said, “I come every year. The guys have gotten a lot better, [and] its a lot more interesting. I loved their act, it was so different.” 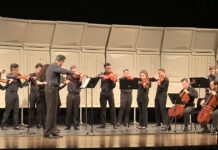