To start off the weekend’s RAH events, Rowan’s Profecy a capella group hosted “RAH Capella,” a showcase of Rowan a capella vocalists.

This year’s show included a guest performance from America’s Got Talent finalist, Butterscotch. The bea tboxing singer kicked off the evening with an electrifying preview of her full performance, which followed the next night in Pfleeger Concert Hall.

With the crowd warmed up and full of energy, Profecy took the stage and performed a three-song set which included “Nothing Holding Me Back” by Shawn Mendes.

“We’ve all put a lot of hard work into putting this show on and I think it’s gonna turn out really well,” said Zack Spencer, a junior Spanish major and president of Profecy. “Generally speaking, I am most excited and the group is most excited for ‘Sing’ by Ed Sheeran. It’s such a high energy song, and the title itself is kind of fitting for the night.”

Next up was the Stocktones from Stockton University, who took the stage in their school colors of blue and black and delivered a very successful performance. Of the three songs they performed, none was so well received as their take on the Mariah Carey and Whitney Houston duet “When You Believe.”

Following the Stocktones was Rowan Vocals, whose five-song set included Ed Sheeran’s “Shape of You” and Bruno Mars’ “Runaway Baby.” Affectionately known as “Ro Vo,” these students stole the show with their performance and had the audience riveted.

Next came the Trentones, who hail from The College of New Jersey. This a capella group became an obvious fan favorite for the night. Among their set-list songs were “Grand Piano” by Nicki Minaj, “Natural Woman” by Aretha Franklin and “The Greatest” by Sia.

Stockata, another a capella group traveling all the way from Stockton University, took the stage with more hit songs that drew palpable energy from the crowd. Their songs included “King of Anything” by Sara Bareilles, “White Blank Page” by Mumford and Sons and “C’mon” by Fun and Panic! At the Disco.

Rounding out the evening was a final performance from Rowan’s Profecy, accompanied by the ladies of the Rowan Dance Team. Performing the last three tunes of the evening, members of Profecy belted out “Sugar, We’re Goin Down” by Fallout Boy, “In the Name of Love” by Martin Garrix and Bebe Rexha, and finally “Sing” by Ed Sheeran.

“My son is a freshman performing with the Profecy a capella group,” said Tara Crapo, 50. “I can’t get over all the different groups and the sounds that they’re able to produce. It’s incredible.”

Rowan alumnus and former Profecy member David Turner, 23, gave his opinion on the best performance of the night.

“I thought Rowan Vocals and the Trentones if I had to pick two,” Turner said. “‘Natural Woman’ was really good. [For] Rowan Vocals, the one where they had them come out and do the little dub-step part, I thought that was really cool.”

The event was followed by a free taco buffet for all performers and audience members. 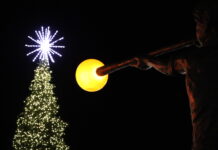 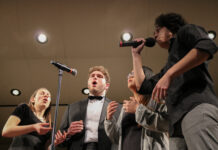 RAH Capella welcomes The Filharmonic to the stage