Dr. Luke Cooper has a big question. What is the good life, and why don’t we have it?

During The Pros and Cons of Personality, the first in a series of lectures from Rowan faculty, Cooper looks to his research about how the negative aspects of personalities affect one’s well being, or “the good life.”

“The DSM is actually a pretty imprecise way of measuring personality pathology, although it’s better than nothing I guess,” Cooper said, an instructor at Rowan.

He lectured that the Diagnostic and Statistical Manual of Mental Disorders (DSM), which is essentially “the bible of mental disorder diagnosis,” inadequately classifies and assesses personality disorders.

Through algorithms that included graphs and scientific studies, Cooper tried to explain how difficult it is to measure the response patterns in disordered personalities.

Among the algorithms, the hardest trait to estimate was obsessive-compulsive disorder, among the least was anxiety.

The lectures are part of the Current Area of Research Brown Bag Series (C.A.R.B.B.S), where faculty can present their research to students, an initiative that has been around since Cooper was an undergraduate at Rowan over 10 years ago.

The brown bag component is an idea that people bring a lunch with them in a brown bag during the lecture, a relatively common idea across universities.

“It’s unique for us though that we’re doing it in the afternoon, so that’s not really a time where people will have lunch, but the name still stuck with the brown bag seminar,” Cooper said.

Even though no one brought their lunch in a brown paper bag, Cooper passed around two filled with candy to the audience. Among them were students and faculty in the field of psychology.

“It’s important to know how mental health is looked at on different levels and how our field sees each individual,” said Pierre Leon, a doctoral student in the clinical psychology program.

Some students, like Leon, take the information presented in the C.A.R.R.B.S lecture and apply them into their own class.

“It helps me with a bunch of different classes. I’ll be able to take their information and apply it to different course work that I’m taking,” Leon said.

The last half of the lecture moved towards the characteristics associated with psychological health and personality.

Cooper also gave the audience his future research plans. He wants to focus his research on positive aspects of personality and what those characteristics would look like.

The transition will be “to create an integrative model of personality assessment and functioning,” Cooper said.

The students who attended encourage other students from different majors to sit in on a lecture.

“I think it’s important for them to know too. If they ever go see a therapist, they can know how we look at it and how it’s important,” Leon said. 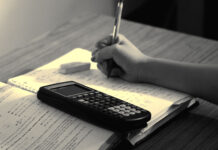