The Rowan community came together at the annual Homecoming Block Party held by Rowan After Hours (RAH). The dinosaur inspired event took place on Hollybush Green from 5 p.m. to 10 p.m. and was full of entertainment and games recognizing the history of Rowan University’s past.

Party-goers of all ages enjoyed live music from acts such as Burn Moore, The FM Band and the co-ed acappella group RoVo. Picnic tables and a dance floor were set up in front of the stage so people could enjoy the music while eating or dancing.

Students attendees received food tickets upon signing in. The tickets could be used at any of the food trucks that came to the event. The food trucks included Tacos Al Carbon, Baby Blue Gourmet Dining, Mobile Diner and Aunt Martha’s Greatest Funnel Cakes. There was also a Landmark Americana Beer Garden.

“I haven’t been to any homecoming events yet, this is the first one I have been to,” said sophomore electrical computer engineer major Helen Pan. “But it’s nice! I get to hangout with my friends and eat and listen to music.”

The event had a variety of activities for party-goers to enjoy. There were games like corn hole and a blow-up tent full of classic carnival games. A man on stilts was making balloon animals, RAH staff members were face painting and a couple of vendors came as well. There was even a giant inflatable hamster ball for people to roll around in.

Perhaps one of the most exciting features of the party was a tent full of live reptiles. There was a constant crowd around the reptile tent as people admired over a dozen cold-blooded creatures. There were tortoises, baby alligators and many different kinds of snakes.

Olga Koturlash, a biomedical engineering freshman, was one of the first people to have the opportunity to hold one of the snakes.

Koturlash and her roommate decided to check out the Block Party after a long week of classes.

“All of us are enjoying ourselves as a family,” Koturlash said. “I think [homecoming is] the first real thing that the freshman have had. Like, the first big school event that Rowan has had so it’s nice!”

The live reptiles helped celebrate PROFhistoric Homecoming and the Jurassic Park theme. There was also a Tyrannosaurus rex skeleton with glowing eyes to take “dino selfies” with, a replica Jurassic Park Jeep and fun signs that said things such as “Warning! Don’t Feed The Dinosaurs!”

The block party was the perfect event to welcome recent Rowan graduate, Jesse Tafel, 23, back to his old stomping grounds.

“I just graduated in the spring with a writing arts degree and haven’t been here since. My girlfriend lives on campus so she told me that the event was going on and I came by to check it out,” Tafel said. “Live music is always a plus. And the good vibes that this town and school always bring, it’s always very welcoming and fun.”

For the rest of our PROFhistoric Homecoming 2017 coverage click here. 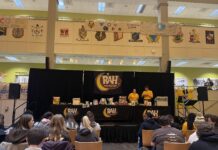 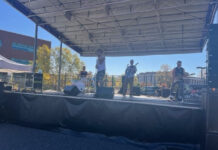