The Owl’s Nest was quiet on Wednesday as Judy Wizmur shared her mother’s story. Terry Herskovits survived the Holocaust during World War II.

The event was put on by the Rowan Center for Genocide Studies and the Office of Social Justice Inclusion and Conflict Resolution. It is part of a series of programs called, “Dining for Diversity.”

“Holocaust survivors are getting older and many of them are passing,” said Stephen Hague, coordinator of the Rowan Center for Holocaust and Genocide Studies and history instructor. “So it’s a really rare opportunity for them to, students, faculty and staff to hear from a Holocaust survivor.”

Herskovits was born in Czechoslovakia with 11 other siblings. Her father had wanted her to go to school and become a secretary to the town’s Jewish lawyer. She didn’t get the chance to even finish high school because at the age of 14, she moved to Budapest. This was after her father had been attacked by a gang for being Jewish.

When Herskovits was in Budapest, she met a dress designer by the name of Gizy who gave her employment and eventually became really close to her.

In 1944, Nazis began to take over Hungary. Herskovits and Gizy were able to find someone to hide them in a farmhouse in exchange for payment. Eventually they were discovered and Herskovits was forced to get on a train so that it could to take her to Auschwitz. The train tracks were bombed by Russians before it got to the concentration camp.

“It would be a shame,” Wizmur said. That was what Raul Wallenberg told Herskovits when he took her off the train, right before it left for Aushwitz.

Wallenberg helped Herskovits and Gizy by giving them papers and a safe place to stay during the rest of the war.

After the war ended she began to realize the terrible truth: Her parents had been killed and only seven of her siblings survived.

After the war ended, Herskovits met her first husband and had two children, one of them being Wizmur, in Budapest. Even though the war was over, the Russians didn’t leave Hungary after it ended. They took over the country.

“One could not speak against the authorities,” Wizmur said. “The penalty for speaking out could be imprisonment or worse.”

Wizmur’s dad was running a successful business and the government didn’t like that. They decided to leave the country with the help of a man her father knew. That same man later sold them out to the government and her father was killed. Herskovits spent three years in jail after her capture. Her children went to live with Gizy.

“On the first night that she was home. She and I were sleeping in the same room and in the middle of the night I got up and I said ‘Mommy I have to go to the bathroom,’” Wizmur said. “It was as if she never left.”

In 1956, Herskovits and her new husband, along with the children, decided to escape to Austria. They made it across the border safely and eventually they came to the United States.

“It’s important, like her coming here and sharing her story,” said Patricia Matias, a senior elementary education major who was at the Dining for Diversity program. “Because otherwise, we get general facts in school, but it’s not as personal and I guess, as detailed as this is.”

Matias still remembers the time she visited the Holocaust Museum and the impact that a room filled with the survivors’ shoes had on her.

“It’s hard to like wrap your head around the fact that this actually happened and so many people died because of the mere fact that they were Jewish,” Matias said.

Hague said that he hopes that everyone who came to the event leaves with a sense of activism to make sure that the events that lead to the Holocaust never happen again. 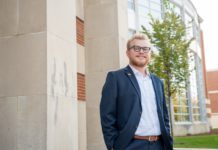 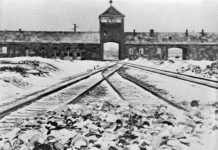 Rossen: Equating the Holocaust With the Present Needs to Stop 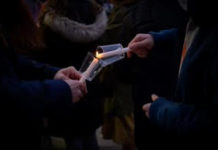