Do you remember the first time you grabbed the steering wheel of your car without your one parent nagging you about cutting corners from the passenger’s seat? I do. I loved feeling the warm August breezes trail through my hair while the radio sang out whatever alternative rock song was on. It was a newfound freedom my high school self just couldn’t get enough of. I had no responsibilities to stress over, no bills to suck away my hard earned cash, just the open road and too much free time. But like the unexpected and random buck playing chicken with me on the county back roads, reality has a tendency to slam into what little money I have put into my bank account to be spent tending to my car.

That proverbial animal carcass recently shattered reality for many of us again this month, not just in the South Jersey area.

New Jersey felt the hit from Harvey in a different way than Texas did, but why? Prices across the nation quickly jumped within a few days prior to the real devastation by Harvey. Some areas reached $8 per gallon. A couple weeks later, southern Florida gas stations charged people astronomical amounts just to leave before Hurricane Irma touched the state.

Hurricane Harvey overwhelmed Houston and Louisiana by dropping 27 trillion gallons of water over both states. Devastation from the Category 4 storm pushed people and families lost without their homes into crowded shelters beside neighbors in the same situation.

20 minutes. The amount of time it takes me to get to Rowan from home. I would say I’m lucky, while other students commute times range from an hour to more. It’s the same for us all though, giving our precious cash or credit card to the gas attendant –that’s if you’re from Jersey – to fill my gas tank for the long haul.

I was driving home one day and passed a gas station that made me do one of those cheesy double takes you would only see in a cartoon or movie. It felt like a snap of the fingers when the oil companies had increased prices. Within a month New Jersey prices climbed an average of 27 cents per gallon for Regular gas, according to AAA. The shutdown of large oil refineries in Texas from flooding due to Hurricane Harvey were the cause of not only New Jersey’s heightened prices, but Pennsylvania, New York, California and the list goes on.

Gas – it’s as essential as air of life at this point, if you own a car. I, like the rest of you, am a commuter. Driving to and from not only college, but an internship 30 minutes away and a freelancing job 25 minutes away. My car eats gas money during the week without much to place back into the savings, especially with the gas prices this month.

The environmentalist within me wants to abandon fuel altogether. However, that strategy might not be the most realistic or logical plan. Instead of driving a mile away to Wawa, walking might be a wealthier decision. As the gas stations sluggishly lower their prices again, I can only wonder when the next spike will be. Until then, we’ll all be driving with caution to the unbeknownst deer that’s waiting alongside the road. 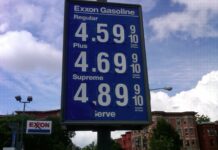