Rowan University professors gathered to voice unrest after their third year without a salaried contract Wednesday around noon.

At the clock tower near Robinson Hall, in their third year without a concrete contract, several professors believe that university administrators have unfairly raised their pay over the years while professor salaries have remained the same.

In the past, faculty have gathered to protest for renewal of their contract. A new contract could increase professor benefits and pay.

“We want to raise awareness so that students understand that two years going into three we are still in the classroom doing what we need to do because we love to do it,” Joseph McGee, a writing arts professor, said at the protest Wednesday.

Some students rallied alongside the professors to support their efforts.

“The teachers are here for us, and for our education. They are not treated as fairly as they should be,” Rebecca Trotman said, a public relations major. 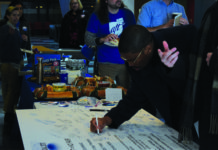 The AFT State Day of Action 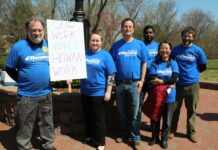