With the intention of registering people as bone marrow donors, Rowan’s football team hosted a drive titled “Get in the Game” this Wednesday in the Chamberlain Student Center.

The national marrow donor program, “Be the Match” worked in conjunction with the football team to organize the event.

Students wishing to become a donor stopped by three different stations, set up and manned by football players volunteering their time. The three stations consisted of a consent form completion, form check and a swabbing station.

Senior health promotion and wellness major Christian Dawkins was one of the volunteers and explained part of the process.

“The whole basis of the program is to find possible bone marrow donor matches,” he said. “All that happens here is a mouth swab, and this mouth swab is tested against the international database to help find a match for you to be a donor for.”

Once registered in the national bone marrow registry, donors are then eligible to donate whenever a match comes up for a patient in need.

Dawkins mentioned the past method used to obtain bone marrow, which was invasive and involved going into the actual bone.

Students who signed up at the event to be a donor will face a different method.

“Now, it’s actually taken directly through your blood, so it’s just like giving blood for Red Cross,” he said.

Debra Blum, a volunteer with “Be the Match,” detailed the history of this event.

“’Be the Match’ runs drives at all different places all over the country, but they have this program called ‘Get in the Game,’” she said. “And that’s what this event is, sponsored by the football team.”

“Be the Match” provided Rowan’s football team with all supplies needed to hold the drive, including the mouth swabs and consent forms.

Freshman biology major Acasha Mann signed up to become a donor at the event.

“My inspiration for helping people is why I’ve signed up to be a donor,” she said. “I’m actually going to school to be a pediatric surgeon and anyway I can help is good with me, whether donating a kidney or becoming a blood donor.” 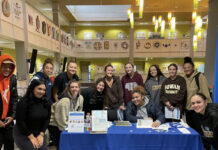