Rowan’s Student Alumni Association (SAA) and Leadership Rowan recently invited alumni back to campus to participate in “Surviving Your 20s,” a panel discussion held in The Owl’s Nest on Wednesday.

In an email invitation sent out to students for the event, Assistant Director of Alumni Engagement Jessica Kanady explained that the event was geared toward connecting students and alumni.

“[We wanted to] bring young alumni back to campus to share with students and other young alumni how they are getting through what can be the most trying years,” she said.

Each speaker presented a talk concerning a chosen topic, followed by a question and answer period.

The first to speak was Kelly Barb, a 2013 graduate who majored in chemical engineering and is now a staff engineer for PSE&G Natural Gas. Her topic concerned developing personally and professionally through volunteer work.

“Volunteering provides the framework to take risks, learn new skills, gain confidence and give back to the community,” she said.

While at Rowan, Barb’s passion for volunteering took root when she joined the student chapter for Engineers Without Borders, traveling to El Salvador five times to implement a clean water project.

“The skills that I have learned, such as critical thinking and project management, were transferable and attractive to employers,” Barb added.

Next to speak was Assistant Dean of the College of Humanities and Social Sciences Stephen Fleming, who majored in education and mathematics and graduated in 2011.

On the importance of recognizing transferable skills Fleming said, “When I think about skills, I put them up next to qualifications. On any job or internship description, you’ll probably see a list of skills. My hope is that you’ll connect your skills to qualifications, which may ultimately lead you to jobs that you might not even have thought of in your wildest dreams.”

Fleming also emphasized that certain academic paths provide more straightforward careers, like education majors going into teaching. Others, like philosophy and religion studies majors, may not have predictable futures.

“For those folks who don’t have that next prescribed step, you have to communicate your worth, but in the process not underestimate yourself,” Fleming said. “Understand that everything you’ve done here at the university has some place as you look ahead at different paths outside of the university.”

Jacqueline Randall, a 2013 graphic design major who works as a web designer for Wellness Marketing, touched on navigating loss and finding yourself. She highlighted that unpredictability, especially in terms of tragic events, can play a large role in a person’s 20s, as it did in hers following her father’s death.

“I started to have a conversation with myself about who I was before that happened and who I am now,” she said. “If you experience death or any kind of loss, it’s important to remember that you might not always be the person you were, but you’re becoming something bigger and better.”

Randall continued down this line of thought, concluding that growth occurs out of hardship and “everything that happens to you makes you stronger.”

The final speaker, Jon Vogel, majored in entrepreneurship and graduated in 2011. His talk revolved around the keys to success in the entrepreneurial realm, as well as in the post-graduation world in general.

A former SGA president, Vogel said that following his graduation speech he, “went home that night and asked ‘What the heck am I going to do with my life?’ since I literally had no idea.”

While in this flux between graduation and a fulfilling career, Vogel took a job at a gym in his hometown, a path he was not happy pursuing.

“To get from where you currently are, you must make a choice and act to get to where you want to be,” he said. “Causality, to me, means hard work, and that hard work and effort is what leads you to success.”

To sum up his journey from local gym to where he is today– owner of a full-service marketing agency in Philadelphia called 215 Marketing– Vogel offered a quote by Ralph Waldo Emerson: “Shallow men believe in luck; strong men believe in cause and effect.”

“The speakers touched on the questions that we all have running through our minds but do not realize are actually quite normal,” she said. 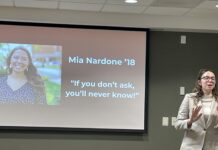 Student Alumni Association Enlightens Undergrads With “Thrive in Your 20s”