Sexual violence survivors opened up about their experiences while an audience showed support through claps, snaps and written messages on cloth squares that would be turned into a quilt.

It was part of Take Back the Night, an event Tuesday in which members of the Rowan University community gathered in the Chamberlain Student Center Pit to show their support for victims of sexual assault.

The Sexual Violence Prevention Task Force opened the event with an open mic session for supporters to share their condoling thoughts. The event also included a walk of support through campus, information tables about assault and a collaborative sewing of a symbolic quilt. Speakers included Dean Richard Jones, SGA President Daniel Cardona, and Freeholder of Gloucester County Jim Jefferson.

Allie Pearce, director of Healthy Campus Initiatives, said Take Back the Night has grown immensely over the past few years due to student organization involvement.

“It’s cool to see so many people out here on a beautiful day,” Pearce said. “They’re here for a variety of reasons and a lot of it is because this is an important issue on our campus.”

Brittany Wehner, a Rowan alumni, is a drug and alcohol counselor who spoke about her story during the event. Wehner, 27, was sexually assaulted at a party by someone she knew when she was 19.

“I always compared what happened to me to other people,” she said. “It was like I shouldn’t even call [sexual assault] what it is because it wasn’t that bad.”

She developed an eating disorder and slipped into drugs and alcohol abuse to cope with her past. When she first opened up to someone about her story, she was automatically blamed for the situation, which kept her from talking about it to others. Victim blaming is a huge issue in American society, according to Wehner.

She explained that a person can only give consent if they are sober and agree to the act. If someone agreed and then changed their mind, it’s not consensual, according to Wehner.

In January, about 40 professional staff members and graduate students were trained in Green Dot, which is a bystander intervention program, which was discussed at the event Tuesday.

“I think we get a lot of students seeing the support that there are for survivors of sexual violence,” Pearce said.

Wehner’s advice to students and faculty who know somebody who has been sexually violated is to be nonjudgmental, patient and to listen. Everyone handles it differently, and a victim should never be blamed, according to Wehner. 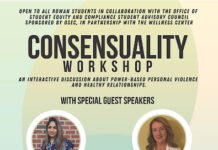