Some students on campus may be harboring im-paw-sters, if recent incidents are any guide. These fluffy fakers, otherwise known as false emotional support or service animals, have become a major issue on campus.

Robin Brelsford, the administrative assistant for the Office of Community Standards, has trained future seeing-eye dogs for almost 15 years, and she says that recent incidents of false service dogs on the university campus have left her frustrated. Some students pretend their pets are service animals so they can keep them on campus.

“I don’t think people realize the impact it has on the disabled community who depend on these dogs to negate their disability,” Brelsford said. “These dogs are very carefully trained for one to two years, so it’s a very long process.”

Currently there are very few laws in New Jersey’s books that deal with fines and punishments for misrepresenting a service dog, and they are relatively minor. One of the only penalties uncovered lists a fine between $100 and $500 for any such offense.

Brelsford also said that because people see her training her dog on and around campus, when people have a problem with any dog, she said she and her trainee are unjustly accused of everything from improper pet waste pickup to incidents of barking and lunging.

Taylor Pankiewicz is training a yellow Labrador named Silvester for a different organization on campus, the recently formed Canine Companions for Independence (CCI) at Rowan University. She said that as someone who trains dogs, there are certain telltale signs that indicate your neighbor’s furry friend may not really be a service animal, signs that go beyond the vest that they wear.

“In general, it’s easier [to see] when you’re a trainer,” Pankiewicz said. ”But when you’re just an average Joe who doesn’t work with service dogs on a daily basis, there are certain behaviors to look for: how close they are to their handler [and] how attentive they are because their main focus should be whoever’s holding their leash. So if you ever see a dog out in public that’s not really paying attention or just kind of lounging out, it’s a possibility that dog is not a trained service dog.”

CCI president and junior biology major Ashley Correa said that she is frustrated by the problems people who bring fake service animals to campus make for her club.

“It’s very hard [for us], especially because we’re a developing club on campus,” she said. “Not many people take us very seriously when they see our dogs because they’re like, ‘How legit are your dogs?’ So it’s hard to address those students who pretend to have service dogs. It’s frustrating and it frustrates our adviser as well.”

As for ways Correa thought the school should respond, she said that university officials could help by spreading the word about their club and taking disciplinary action against fakers. 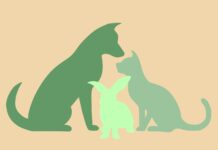