Last week, Whit reporter Danielle LaSassa discovered the story behind Savitz, the Campbell Library and Esbjornson Gymnasium. Click here to read that. This week, LaSalla tells us the history of James, Westby and Wilson Hall.

Rowan University has a long history that dates back to 1923, when Glassboro Normal School was founded. Over the years, notable individuals have contributed to the school in countless ways, from leadership to excellence in teaching. One way to learn about these people is looking to the names on our campus buildings.

James Hall was a recent addition to Rowan University’s campus. According to Rowan Today, the building was named after the fifth president, Dr. Herman D. James in April 2012 during a ceremony. During his presidency he created the “doctoral program in educational leadership in Rowan’s College of Education,” he was also dedicated to his students and strived to have a “family atmosphere” at the campus. James’ presidency lasted 15 years, and he ended up retiring in 1998. He continued teaching as a professor until 2007 where he officially retired from Rowan.

Before James Hall was in fact James Hall, it was known to students as Education Hall. According to Rowan’s 2007 yearbook, The Image, Education Hall was opened for student use in 2006. James’ presidency was influential for Rowan especially with its faculty and students. According to Rowan’s website, James created the engineering college as well as adding the engineering building to the campus. He not only focused on engineering, the website says he also expanded the college of communication as well as doubled the amount of student and faculty minorities on campus.

James’ great accomplishments as president caught the attention of the Rowan Board of Trustees. They ended up voting in February 2012 for the Education Hall to be named after him.

Westby Hall has been a part of Rowan for years, and has continuously served the same purpose since it was built. According to More Than a Cold Stone, Westby Hall was built in 1965, during the period of expansion under Rowan President Robinson. Westby Hall ended up costing the college $1,091,089 and consists of twenty classrooms and additional faculty offices.

Westby Hall was named after Dr. Cleve Westby. According to Rowan’s website, Dr. Cleve Westby was an honorary degree recipient of “Doctor of Letters” in 1967. Reference.Com defines the Doctor of Letters as it being, “one of the highest degrees conferred upon a degree candidate,” reserved for “the highest level of knowledge in their chosen subject.”

Today, Westby Hall contains an art gallery on the first floor. It is meant to display culture and art from places around South Jersey as well as student work.

Wilson Hall is another building that has been a part of Rowan’s campus for years, and was always known to its students as the music building. According to More Than a Cold Stone, Wilson Hall was opened to students in May 1972, and cost $5,828,000. It consists of a 1,000 seat auditorium, 17 classrooms, 90 music practice rooms, 16 faculty offices, 32 studio offices, and student lounges. Before this building was constructed, students studying music went to Bunce Hall.

Wilson Hall was named after Harold Wilson, who was a professor in the early years of Rowan. According to More Than a Cold Stone, Wilson was a social studies professor and his department brought “both culture and world understanding to the campus when it conceived, organized, and carried out a series of noteworthy projects.” Wilson was involved with his students and helped the department grow to be what it is today. Once Wilson Hall was built, it was immediately named after him.

Although Wilson Hall mainly houses the performing arts, it also holds law and justice classes. The building was also a part of big expansion that took place under President Robinson. Music classes are held there still today. 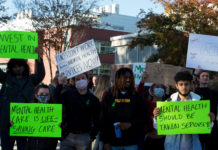 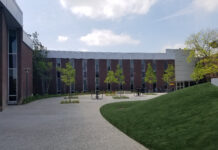 Rowan and Glassboro gather together to open Wilson’s Courtyard