Theater and dance majors at Rowan University are making their voices heard over what they feel is unfair treatment.

Some of the recent actions taken by students include creating a petition that has been circulated throughout the student body and a using a #spaceforrutd hashtag across social media to drum up support for their cause.

Sophomore acting and directing major Kylie Westerbeck is behind the petition. She says that the action taken by students in the department is mainly in response to a lack of space available for them to practice.

“Dancers rehearse in the racquetball rooms, theater majors rehearse in those rooms. We often find ourselves rehearsing in the hallways of Bunce and the administration of this campus will see that once they move into Bunce.”

She said her petition currently has support from multiple areas of the student body.

“It’s definitely making a lot of noise,” Westerbeck said. “We’re trying to keep it as peaceful and as civil as possible, just because we want to start a conversation that I feel hasn’t been held at this university.”

As for why she started this petition, Westerbeck said there was a sense among theater and dance majors that they were getting the short end of the stick.

“A lot of other students are getting buildings for their work and as a theater major, I study a lot, which is called rehearsing,” Westerbeck said. “We don’t have rehearsal space, we don’t have study space for our craft, and so I just wanted to initiate a conversation across the university and with the administration just to make sure that this is getting heard.”

As junior theater arts majors Molly Jo Gifford and Hallie Wilmes explained, the primary issues students seek to have addressed stem from a lack of space for rehearsal, as well as improper maintenance of the spaces students have.

Gifford said that with the early morning to late night schedules that the Department of Theatre and Dance keeps, being asked by the university to vacate the building at around 11 p.m. or midnight puts a strain on what the students in the department can do.

“Recently, with the renovations of Bunce to welcome [faculty members]… they’ve started to do things like secure the building more,” Gifford said. “So that means kicking us out of spaces at night, locking classrooms, and there’s just a lot of commotion going on with the move.”

Wilmes also added that along with the continued lack of space, the issue of cleanliness was a major one for students in the department. 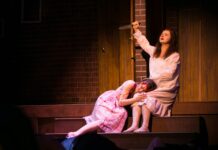