As championship season draws closer for some winter sports, the recent string of success for the Rowan men’s track and field team has not made them complacent.

“We already have more people qualified for nationals than we had go to nationals last year,” head coach Dustin Dimit said. “We have a bunch of guys that are safe and will get in and others who are close. We’re just trying to help people stay healthy right now.”

Last year, Tucker and Benjamin were the only two on the men’s side for Rowan to compete in the DIII Championships with Benjamin earning All-America honors. Tucker also advanced to nationals as a freshman where he was named an All-American.

In the Profs most recent meet, the John Covert Classic, they had two individuals finish in first place. Tucker took first in the high jump at 6′ 8.75″ while junior Jamil Jackson won the 400 meters with a time of 51.16 seconds.

“It was a good meet. We had good competition, we had a lot of high finishes,” Dimit said. “Not as many national qualifying marks, but we didn’t expect it in that facility. Going into [Ithaca], it’s our first time going there, it’s where ECAC’s are going to be and it’s supposed to be a nice facility. We’re excited for that.”

Dimit said that the team needs to make sure they adjust the volume of training they do because they will be traveling on Friday for the Bomber Invitational the following day.

After that next meet, there are only two and a half weeks until the New Jersey Athletic Conference Championships. Rowan will enter as the two-time defending champion.

“We’re just going week to week,” Dimit said. “We’ll be very heavy favorites, or kind of training through that for ECAC’s and nationals to make sure we get more people there. There will definitely be some people more focused on that because they’re not at a national level yet, but for our top athletes, we’ll train through.” 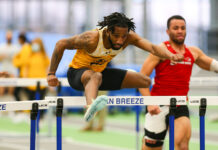 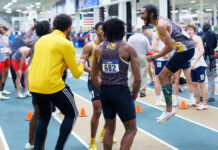