Before I get started, I just want to say that I hate Tom Brady and the New England Patriots with a passion. I still believe that they should have an asterisk next to their achievements due to their cheating ways. But with that being said, there is no denying the facts. It pains me to say it, but Tom Brady is the greatest quarterback of all time.

Writing that made me nauseous, but I cannot live in denial any longer. After watching Super Bowl LI, Brady is without a question the greatest. After being down by 19 points in the fourth quarter, Brady led the Patriots to an overtime victory against the Falcons. Not only did he lead them to a victory, but broke so many records along the way including most Super Bowl victories, most Super Bowl MVPs, most passing yards in a Super Bowl and the list goes on and on. With all the anger that I had bottled up inside of me, all I could do at the end of it was laugh at the ridiculousness that is Patriots’ manager Bill Belichick.

Along with watching the greatest quarterback of all time, I truly believe that we witnessed the greatest Super Bowl of all time as well. The thing that I love most about the Super Bowl is that it is always so much more than a game. They really make it an all-out production. From start to finish, Super Bowl LI was one to remember.

The highlight of Sunday may have very well been the lack of one element. And that would be the inclusion of politics. Lady Gaga, who in my opinion had one of the greatest half time performances of all time, was rumored by many to be prepared to speak her mind about her displeasure with President Trump during her act. To everyone’s pleasant surprise, she substituted a hateful speech with one of patriotism before she went on to sing her hit songs. I thought that this was in great taste. Being able to escape all of the division in the country for a few hours was very refreshing and much needed for all.

Super Bowl Sunday marks the birth of a new champion, but also the death of football until next season. Until then we can all get harassed by Patriots fans and their annoying bragging. This off-season there will be no bragging for me, but instead my usual routine which includes praying that Tom Brady will start to suck soon, and for my Eagles to get ’em next year. 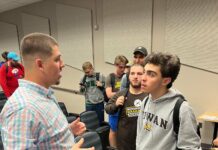