Radio, TV and Film Professor David Bianculli hosted a signing at the Rowan Barnes and Noble Bookstore on Dec. 5 for his new book, “The Platinum Age of Television: From I Love Lucy to The Walking Dead, How TV Became Terrific.”

The group heard excerpts from the book read by Bianculli himself, along with a video presentation covering the TV shows Bianculli has studied.

Bianculli entertained the attendees with poetry he wrote in his teens in while also showing television clips from different shows. Bianculli reconstructed the basis of his book into a short presentation for attendees of the event. Through clips from shows such as “Mr. Roger’s Neighborhood” and its spin-off show “Daniel Tiger’s Neighborhood,” Bianculli demonstrated how TV has changed from the 1960s to the present.

“There’s a lot of people enjoying today’s TV, not knowing where it came from,” Bianculli said. “There are some people who watched old TV and don’t enjoy the new stuff. I bridge it, and so because I have been a TV critic, I can say there was good TV then and there’s better TV now.”

Aside from his job as a professor, Bianculli has been a television critic for 40 years also makes appearances on “Fresh Air,” a radio-show hosted by Terry Gross on WHYY in Philadelphia.

The book was written over the course of one year. Bianculli said it was the structure of the classes he teaches that inspired him to research the topic and write about it.

“We teach a lot of it genre by genre and it made sense that there wasn’t a book like this out there like this, so I wanted to teach it,” Bianculli said. “The more I looked at old shows like I was playing Charles Darwin, the more fun it was.”

Bianculli had numerous students attend the book signing. Senior radio, television and film major Erin Cahill said Bianculli has been a favorite professor of hers. She also mentioned the two bonded well when Cahill took a class with him. The two share an interest in the TV show, “Better Call Saul.”

“He always had such a good effect on me and I loved his class,” Cahill said. “I was always interested in his lectures. So I wanted to read his book to see what it was all about.” 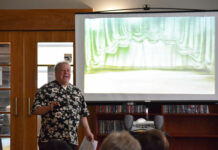