This past Saturday, Rowan’s Public Relations Student Society of America (PRSSA) and sorority, Delta Phi Epsilon, held the annual “Dance Away Cystic Fibrosis” in the Chamberlain Student Center Ballroom. The event provided for entertainment and activities to raise money and awareness for cystic fibrosis.

Cystic fibrosis is a life-threatening genetic disorder which affects the respiratory and digestive systems. Currently, there is no cure.

The event, run by Rowan’s Public Relations Student Society of America (PRSSA) and Delta Phi Epsilon, was first held in 2013 in honor of Colette Bleinstine, a Rowan student and vice president of special events for PRSSA who died in 2012 from the disease.

Bleinstine, who was active in educating people and raising money for cystic fibrosis, inspired the members of PRSSA to create the event.

At the event’s start, the parents of Colette, George and Nancee Bleinstine, spoke about their daughter and the disease. Their daughter’s death led to them creating the Colette W. Bleinstine Paying It Forward Foundation. The organization raises money and awareness for cystic fibrosis, as well as helps people who need financial help.

“We wanted to do something to keep our daughter’s memory alive because she was such a giving person,” Nancee said. “She was all about paying it forward. She said that paying it forward was the best feeling in the world. We started this foundation to continue her legacy of giving, loving and being a light in this world. All the decisions we make and all the people we go to, she is always at the heart of all our decisions.”

George and Nancee said they have given away $50,000 within the past four years. They helped several people who lost their possessions to house fires and built a ramp for someone in a wheelchair. They also funded several scholarships, including three $1,000 scholarships to students at Washington Township High School (Colette’s alma mater) for community service, a $2,000 scholarship to a member of PRSSA and two $2,500 scholarships to two patients with cystic fibrosis at the Children’s Hospital of Philadelphia.

In addition to the performances, the event had food and beverages, a photo booth, crafts and several raffle baskets.

“[Cystic fibrosis] is one of our biggest philanthropies so we like to work closely with that and support,” the junior psychology major said. “[The event] was awesome. The entertainment and everything was great.”

Several Rowan students who aren’t involved in the cause, such as junior journalism major Emely Perez, came to support and enjoy the event as well.

“I thought it was great,” Perez said. “It was a nice way to fund money for a great cause. These kind of genetic diseases grab my attention. I always want to learn more about them so I wanted to come to see what the event was about.”

All proceeds raised from the event will be donated to the Delaware Valley Chapter of the Cystic Fibrosis Foundation, according to senior public relations major Amanda Smith, director of philanthropy for PRSSA. 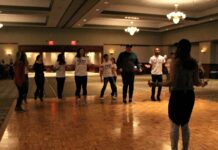 “Dance Away Cystic Fibrosis” teaches people about dancing and disease 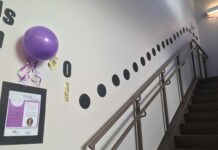