Julian Zuniga, a senior radio, television and film major at Rowan, doesn’t consider himself an artist, but his work says otherwise.

Originally from Colombia, Zuniga draws a lot of inspiration for his work from the sights and culture there. His exhibit in Westby Hall Gallery 207 focuses on the creatures, environments and people of Colombia and Cuba.

Specializing in documentary film, Zuniga fell into photography when he began traveling around Colombia and Cuba.

“I thought if I’m making the effort to go to a tropical rainforest, if I’m making the effort to spend all this time going there, then I might as well try to take a good picture,” Zuniga said. “It was trial and error and spending days and weeks at a time out there in the rainforest. It gets you thinking how lucky you are to be there and if you are there, you might as well try to do the best you can with the tools you have.”

Zuniga spent four years on and off traveling to different areas in Colombia and Cuba and documenting what he saw. In addition to the pieces he shared in his exhibit, Zuniga captured photos from riots surrounding the FIFA World Cup in Brazil.

Many people who live in the area were upset that significant amounts of money were used to fund the stadium and event while people surrounding the stadium lived in poverty.

“The world’s not perfect, but you do see things in a very raw point of view. You’re not seeing these cultural riots on a TV, you’re actually there,” Zuniga said. “If there are no photographers to give voice to students and people who have things to say, then I don’t think I’m doing what I should be doing. Cops and people aren’t afraid to shoot students. It serves its purpose legally and ethically to show excessive force and all these things because they speak for themselves.”

His efforts did not go unnoticed, earning him honorable mentions on two of his projects from the International Photo Awards and an invitation to the Lucie Awards in New York City.

The next few projects Zuniga has lined up are documentary films, more relevant to his major. For a course next semester, Zuniga has to complete a documentary and has chosen to continue one he began a few years ago.

While traveling in Colombia, Zuniga became enamored with the graffiti he saw, calling them “masterpieces.” One graffiti artist who stood out to him was Christian “Crisp” Peterson, a man from Australia.

“I thought it was interesting that an Australian — a typical blond-haired, blue-eyed guy — would come to Colombia to do artwork,” Zuniga said. “His work criticizes the government and always relates to cultural things. That’s part of what I’ve learned: there’s just so much culture to things that we may not be used to here [in America], but in other places people see the importance in that.”

Zuniga and Crisp worked together a few months to create a pilot, or short documentary, to show the passion of Crisp and the value his work has. Zuniga received an honorable mention for “Graffiti in Bogota” at Rowan’s Radio, Television and Film Media Festival for Best Documentary or Public Service Announcement in 2014, when he first began school at Rowan.

As part of the documentary project for class next semester, Zuniga wants to expand this documentary to include work Crisp has done in the past few years while allowing Zuniga to use his evolved documentary knowledge and skill.

“It’s such a unique story, I don’t think the short documentary does justice to what’s been going on the last couple years with him and myself,” Zuniga said. “It’s going to be very interesting to go back through four years of footage and get new footage to hopefully show something better and something good.”

Zuniga seeks to show truth in all of his works, often risking a lot to get the content he needs. During his travels, he was shot at, robbed and arrested, a slight insight into what it takes to capture some of these moments.

“The work speaks for itself,” Zuniga said. “I never set out to have this artistic sub-reference. For me, it is what it is visually, but just the process of getting to these places and doing this research is what I want people to understand. These things don’t come across by chance, you have to go and look for them and really risk a lot of things to find what you need.” 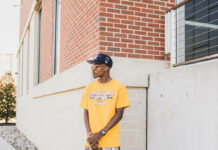