This past Thursday Rowan’s Department of Music hosted a tribute concert to the late musician and inventor Les Paul, featuring Rowan’s Jazz Band and the remaining members of Les Paul Trio.

The jazz band, under the direction of Denis DiBlasio, the director of jazz studies and composition at Rowan, took the stage during the first half of the show. The band performed six songs: “Butter Ball” by Michael Davis, “Good Bait” by Tadd Dameron, “Spain” by Chick Corea, “Heat” by Patrick Williams, “Pennies from Heaven” by Arthur Johnston and “Alabamy Bound” by Ray Henderson.

Sue Harasink and her husband Adam traveled from Winona to attend the concert in support of their son, Sam Harasink.

“We come for him but enjoy the music,” Sue Harasink said. “I love when they get into it like in ‘Spain’ and can’t help themselves from moving.”

The band practiced for about six weeks leading up to the concert. During the performance the band even took time to highlight some students.

Drummer Joe McGuth, a freshman jazz studies major, was one such student, who went off on an electrifying solo in “Spain.”

A fellow band member of McGuth’s, freshman business major Rachel Savage – who plays the alto saxophone, said she thought McGuth’s performance was one of the best parts of the concert.

Rowan students were not the only ones to perform in the concert. Special guests included adjunct professor of jazz trumpet and improvisation George Rabbai, who appeared on “Pennies from Heaven,” as well as other members of the faculty. For his birthday, DiBlasio arranged the song specially for Rabbai, in hopes that he would sing it for the concert.

The second half of the show focused more on the late Les Paul. Michael Braunstein, the executive director of the Les Paul Foundation, introduced a video presentation highlighting Paul’s contributions to the music industry, including the electric guitar and the 8-Track Recorder.

The Les Paul Trio, consisting of Lou Pallo on guitar, Paul Nowinski on bass and John Colianni on piano – all of whom played with Paul during his career, closed out the show with songs and stories of the late legend. The three played with Paul at the Iridium Jazz Club in New York when he was alive.

They opened their set by playing along with the late Paul on a screen.

Through the rest of the night the band members shared music with the audience as well as their own experiences working with Paul.

Karin Massaro from Swedesboro considered the trio her favorite part of the show.

“They were mind-blowing,” Burnham said. “I felt like I was watching living legends or something like that. The piano player is the best I’ve ever seen live.” 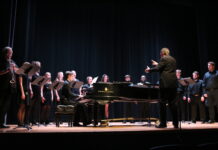