It has been a very long time since citizens of the United States felt as though politicians were doing everything that they could to benefit the people they are supposed to serve. Most politicians today will abuse their power to benefit themselves, donors and “the establishment.” When you turn on the news, one of the common themes is the corruptness. From Chris Christie’s bridge scandal to Hillary Clinton’s deleted emails, it is apparent that something needs to change.

Change is now on the way. Donald Trump emerged as a middle finger to the establishment when he announced his candidacy for president. In just a little over a year and with no political experience, Trump beat out over 15 of the Republican Party’s top candidates. Was it because of his policies? Was it because of his political correctness? Was it because of the way he presents himself? No. The people of the United States chose Donald Trump as the nominee for the Republican Party to send a direct message to Washington D.C. that they are not going to put up with their corrupt tactics any longer.

The Trump versus Clinton storyline is almost one out of a movie. Clinton, who could not be any more pro-establishment, is going up against a guy who wants to “drain the swamp in Washington D.C.” Trump has brought to light all of the dark secrets of Washington and shown the people of the United States that it is time to stand up for themselves.  Officials in Washington are scared. They want another puppet in office who they can use to push their agendas to benefit themselves. Trump will not bow down to interest groups or corporations like other politicians will. He reiterates to the working people of America at his rallies, “I am your voice.” He is not a politician, he is an angry citizen of the United States who chose to run for president because he wanted to bring light to the corruption of this country and make a difference.

Win or lose, the people of the United States have won already. You don’t have to like Trump’s policies to appreciate what he has done to expose the media and dirty politicians. You shouldn’t have to be a “politician” to be able to be successful in politics. What you need is an understanding of the citizens of the United States, and enough unselfishness that you are not looking to benefit yourself, but instead the people who you are serving.

Donald Trump as a candidate might not be the most appealing of ideas. However Donald Trump as a symbol is revolutionary. America needed a dose of Donald to wake up its citizens about the dirt that goes on in Washington. One could only hope that his success will produce more people in the future who thought they wouldn’t have a chance because they are not an insider. 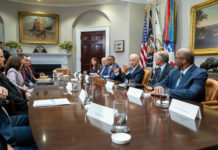