This is an installment of Matt Kass’ weekly political opinion column “Left, Right and Center”

One of the most interesting dynamics of the 2016 election, and one that in my opinion has gotten very little reflection, is the political fate of rank and file members of the Republican Party after Nov. 8. The people going about their daily business on Capitol Hill and elsewhere who suddenly have to deal with the face of their party being a snarky, profane and flippant strongman.

Marco Rubio is one such example. Some of the problems he has are self-made. For example, after swearing up and down, left right and center that he wasn’t going to run for another term in the senate, that’s exactly what he’s done.

But at a debate this week between Rubio and his challenger Patrick Murphy, he was forced to spend a good chunk of time explaining why he was incredibly uneasy with a Trump candidacy, but still voting for him. Rubio’s status as a rising star in the GOP was delayed when he dropped out of the race earlier this year and now he has to carry this burden on his back.

Paul Ryan is another perfect example of the unintended consequences of a Trump candidacy. As speaker of the house, he theoretically should be focusing on the minutiae of daily political work. Instead, he’s had to fend off a series of nasty tweets and remarks from Trump, who has derided him for turning tail on the presidential trail in favor of shoring up the GOP presence in Congress.

Ryan is absolutely right to be diverting resources away from Trump. Most polls now have him losing the election, and if he really tanks on Nov. 8, Ryan and the rest of the Republican leadership need to be ready to avoid a bloodbath down the ballot. But that’s yet another example of how Trump is making life difficult for ordinary Republican leaders.

But by far the most tragic scenario belongs to Ted Cruz. He was the final challenger left standing to oppose Trump in the primaries. He engaged in an acrimonious battle, during which Trump insinuated, among other things, that Cruz’s father was implicit in John Kennedy’s assassination.

After Trump had wrapped up the nomination, Cruz refused to endorse him, claiming that someone who attacked his wife and father would never garner his support. He even went so far as to torpedo his own speech at the Republican convention, garnering boos and jeers in the process.

But to outside observers, he was staking out a bold position for the future, perhaps even another run four years down the line. Analysts reasoned that Cruz was making sure history would smile fondly upon him. He would be remembered as one of the Republicans who stood up to Trump.

Not so. He came back around to support Trump, right around the time it appeared he had a good chance to catch Clinton. Since then several factors have combined to dropkick Trump’s poll numbers down the toilet, and Cruz appears to be left holding the bag, along with other Trump groupies like New Jersey Governor Chris Christie and former New York City Mayor Rudy Giuliani. No principles, only opportunism. I predict that’s a message that won’t sit well with voters next go around.

It’s examples like these that show that not only has Trump’s rhetoric been toxic for the general tone of the election, but he’s also corroded his party structure from within every time he fires a verbal jab or shoots off an ill-timed tweet. 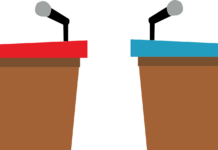