Despite the pressure of playing under the lights in a sold-out home stadium, the Rowan football team was able to dominate William Paterson, 31-0, on Friday night to improve to 2-0 on the season.

With the first New Jersey Athletic Conference game of the season in the books, the team will look ahead to a road matchup this Saturday, Sept. 24 against Montclair State University (1-1). After the spectacular defensive performance against William Patterson, the Profs look to repeat that same success Saturday.

The brown and gold did not allow any first downs in the first or fourth quarter versus the Pioneers and held their opponents to just 68 yards on 45 plays.

Sophomore defensive end Kevin Stokes played a key role in stopping the William Paterson offense from gaining any momentum and is a player to watch in the upcoming game.

Stokes played just three games last season, but recorded six tackles, including two for loss on third downs, in the win over the Pioneers.

This week the defense will take on a Red Hawks team that is averaging over 22 points per game, and which ranks third in the NJAC in rushing offense and fourth in passing offense.

It should be a test for a Rowan defense that sits second in the conference in total defense.

“I can play my reads better and stay to what I’m coached to do and continue to be a team player and not stray away from the pack,” Stokes said. “It’s the team’s success that matters at the end of the day.”

Profs junior quarterback Dante Pinckney will also be in the spotlight as he comes off a game where he completed 17-of-27 passes for 258 yards with three touchdowns and one interception. He also ran the ball six times for 26 yards.

Pinckney has been Rowan’s clutch player so far this season, pulling off an impressive second-half comeback against Widener University in the opener and posting a solid performance against William Patterson.

“We just have to stay on the right track, have everyone come into practice with the right mindset and go into the game ready to play,” Pinckney said.

Coming off a bye week last game allowed the brown and gold to rest and prepare more extensively. This week, the Profs will dive right back into the action on a full week’s rest.

Head coach Jay Accorsi helped prepare his team for two different quarterbacks in their latest victory. Heading into Montclair, the coach has the task of creating an offensive game plan for a team he believes mirrors a similar image to his.

“It’s a tough place to play, they’ve played us really well the last couple times,” Accorsi said. “It will be a tough conference game. They’re going to play great team defense and score points to win. It sounds kind of like a recipe we use.”

If Rowan can manage to get a victory against the Red Hawks, they will move to 3-0 overall and begin the NJAC schedule 2-0, the same start that they had last season. A win would also help the team keep pace with current conference frontrunner Christopher Newport (2-0 NJAC), which plays Saturday as well. 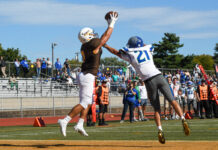 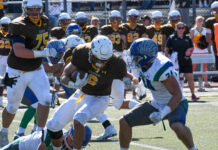 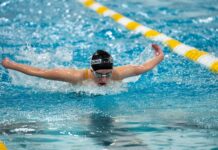