The field hockey team at Rowan is a perfect picture of consistency.

In every season since 2009, the brown and gold have started the season 3-2. They have qualified for the New Jersey Athletic Conference Championship Tournament every year since its inception in 2011, made it to the championship game in three of those seasons, and had an appearance in the NCAA Division III tournament in one.

This season’s 3-2 start is even more impressive when you take into account that the team dropped their first two games of the year, against Ursinus College and Franklin and Marshall College. Following some personnel and position changes Rowan has reeled off three straight wins.

“We’re playing better, but we weren’t playing poorly [before],” head coach Michelle Andre said. “We just made some adjustments and we’re playing with a lot of heart. They just don’t give up.”

The team’s most recent win came against Cabrini University, 3-0, on Tuesday.

For the players, the key to their success is something that will be easy to keep up with as the season progresses.

“I think we’re just going to build off of what we have,” junior goalkeeper Carly DeMarco said. “Nothing’s really going to stop us. We’re going to keep building in practice and get better each game.”

Freshman Bridget Boyle echoed her teammate’s words, saying that there is nowhere else for the team to go but up. According to Boyle, they don’t expect a loss for the rest of the season.

If the brown and gold continue to pile up the wins, the freshman is going to have an important role in that.

Despite her youth, the forward from Medford, New Jersey leads the team with four goals and is tied for the lead in assists (2). She was named Eastern College Athletic Conference/Corvias South Region Field Hockey Rookie of the Week on Tuesday.

“I didn’t know until my friends told me and when they did I was so happy,” Boyle said. “I was so excited I told my mom right away. It’s just something that I worked so hard for and my teammates pushed me to get those accolades. I’m proud of it.”

However, there is not much time to celebrate the win as Fairleigh Dickinson University-Florham comes to Glassboro on Thursday. It is the second of three games, all at home, that the team will play this week, a change of pace for a group that usually only plays twice a week.

DeMarco acknowledged that the schedule is a little different, but despite this, she said that the team’s focus is solely on Thursday’s matchup with the Devils. Rowan posted a 2-1 win against FDU-Florham last season.

“I expect the same thing. We’re going to come out and play hard,” Andre said. “Obviously we expect to win that game, but it’s great competition and it will be a great game. This is a big week for us. The best thing is we keep getting better every time we play so we just have to keep doing that.” 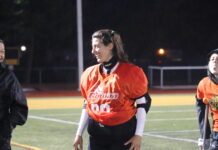 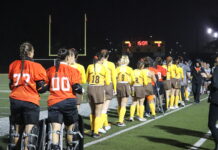 Field hockey holds onto a 4-3 victory vs. Montclair on senior night 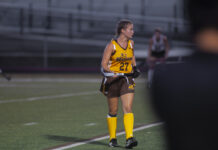