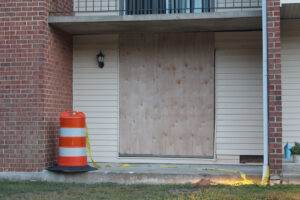 Two men were arrested Sunday morning after driving a car into an apartment at Crossings at Glassboro.

The Glassboro Police Department received a call at 3:12 a.m. that a car had crashed into the back of an apartment in building D of the Crossings at Glassboro Apartment Complex. Two white males exited the vehicle and fled the scene, according to a report released by the police department.

According to the report, the vehicle drove through a wooden fence, slammed through a wall and stopped in the living room of an apartment, “causing substantial damage.” No one was in the apartment at the time, the report said.

While officers were investigating the incident the two men returned and upon observing the police, driver Thomas W. Walters attempted to escape on foot, the report said. According to the report, after a short chase he was apprehended and was charged with several violations including a DWI and obstruction.

The passenger, Patrick K. Carter, was detained without incident, according to the report. He was also charged with several violations, including underage drinking.

After the incident, some residents at Crossings at Glassboro were unaware of what had occurred.

“I just came home, and noticed the pole in front of our parking spot was destroyed and the room next door was all boarded up,” said Sondra McNicholas, a senior elementary education major, who lives in an apartment next door. “I don’t know what happened, nobody told us anything.”