Kicking off their “Season of Horror” on Oct. 20, the cast and crew are hard at work bringing Bram Stoker’s novel to life onstage.

Directed by Elisabeth Hostetter, this stage adaptation from William McNulty follows the classic tale of Professor Van Helsing and his comrades who seek to destroy the king of vampires himself, “Dracula.”

Assistant Director said “Dracula” required an immense amount of planning. For over two years, there was monetary support that the theater department needed to garner in order to even get the play off the ground. Fusco also wishes to make the play an experience, with plans to turn Tohill Theatre into an asylum for the production.

The need for other resources also became apparent to Fusco, the cast and crew when the adaptation called for action onstage.

“Dracula is by nature violent, there’s no way around it. Combat training takes a lot of time and a lot of expertise,” Fusco said. This led to Rowan University finding Brett Cassidy, the fight coordinator for the production.

This take on “Dracula” from McNulty is going to rely heavily on special effects as well as fast-paced action that enable the story to be adapted to stage, Fusco added.

“This is a very ambitious production, and I love a good challenge,” Cassidy said, referencing his 16 years of stage combat experience.

“As they say: ‘Stagnation is death.’ If an actor has an interest in serious training in stage combat there are a number of routes to take,”Cassidy said. “I like to work organically with the director, the actors and the physical space we are in.”

He also noted working in a variety of different settings can affect how well some scenes work.

“Some fight directors will read a script and come in day one with the entire show choreographed,” Cassidy continued. “I like to begin with a blank slate, sure I may have some ideas I want to work in, but I like to avoid preconception of what an actor ‘should’ be doing.”

All directing set aside, the actors are already hard at work bringing these iconic characters to life, or the exact opposite in the case of junior theater major Robert Mora who is playing the titular Dracula.

“There’s a sense of instinct that I’ve been trying to instill with Dracula. He’s a very animalistic character and every time I read the role, I try to follow as many impulses as I can,” Mora said.

He also cites Bram Stocker’s novel as another key point of inspiration for his take on the character.

“The read-through process really opened my eyes as to how many Dracula interpretations there really are and though I love many and learn from them, I really look forward to the opportunity of creating my Dracula, a Dracula that has never been seen,” Mora said.

These chances to craft and work on realms of theater that have not been experienced before by students is something Fusco is hoping for.

“Every show to me should have as many opportunities for kids to learn, part of our mission is to expose our students to all different genres of theater,” Fusco said.

The entire “Season of Horror” for Rowan’s theater department include shows such as, “Danse Macabre” in December, “Titus Andronicus” in February and “Carrie: The Musical” in April.

“There’s all these elements that we’re pulling together. It’s the most complicated play that we’ve ever produced here,” Fusco said, who has been at Rowan for 18 years. “Just the challenge of being able to pull this off I think is going to be huge, it’s going to be awesome actually.” 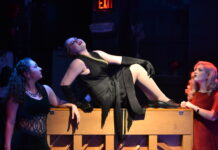