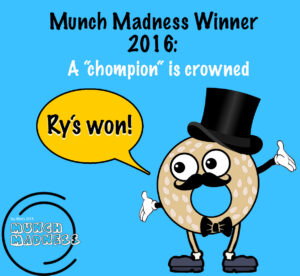 All good things must come to an end. With this record, we bid goodbye to yet another year of Munch Madness. Thankfully, unlike its basketball counterpart, our culinary competition doesn’t bill itself as “March” anything, while somehow ending in April. We’re looking at you NCAA. Before we go, there is the small matter of one final result to get through. Did Ry’s Bagels take the advice of rapper Drake, and go back-to-back, or did Ciconte’s plate a dish too hot to handle. On to the results!

In a result that was less surprising than the sun coming up over the horizon in the morning, Ry’s Bagels is your 2016 Munch Madness champion. As it turns out, one of the ingredients in Ry’s everything bagel was the recipe for complete and utter domination in the polls. It wasn’t even close, except for the first three days in which Ciconte’s was up eight points, but then was barraged in a 90 point spread. The local bagel joint tossed Ciconte’s up in the air, spun it around, baked it in the oven, cut it into slices and then served it with a side of garlic bread. This puts the bagel restaurant in a rather rarefied air. But it’s not over, not that it ever was. Next year’s crop of competitors are sure to be holding back, looking for any weaknesses in the champs.

It’s over. Our food overlords have been decided. Our community, our friends our livelihoods … our hunger have been decided by you… or the one person who sits at Ry’s and votes around the clock for the moderately priced bagel establishment. Our eateries worked over time, delivering our food to our drunken selves at ungodly hours of the morning. We needed guidance. We needed one consolidated menu to go to in the clutch. Now, with Ry’s opening at night on Thursdays, it seems like that vision is coming true. The ‘Boro sleeps quietly tonight, our minds at rest over who we must order from.

We’ll see you back here next March, and until then keep eating at all the sushi, pizza, bagels and grilled cheese that your heart desires.