Each semester brings new faces to the classroom and around campus. But, this semester, two of those faces just happen to have wet noses, floppy ears and fur.

Feeling the need for caffeine in the morning, junior history major James Witkoski found out the hard way that being the caregiver for one of those faces makes the walk to get coffee a little longer than usual.

“Every time I bring [the dog] to class I get swarmed,” Witkoski said. “The first day I brought him to campus, I walked into [the student center] to grab a cup of coffee and barely got through the doors.”

The other week, a walk from the student center to parking lot A took the pair 45 minutes.

But Witkoski is not just a student with an irresistibly cute puppy he can parade around campus. He brings his new buddy—a black labrador retriever named Augie— to class because he is one of two student volunteers who have received puppies to raise this semester for Canine Companions for Independence (CCI). This nonprofit organization allows the puppies to be trained to become service dogs through Rowan University’s student chapter of CCI.

Senior mechanical engineering major and CCI at Rowan Treasurer Nicole Puzio is the other volunteer. She is raising a yellow labrador retriever and golden retriever mix named Treat.

Through CCI, service dogs like Augie and Treat will eventually belong to the physically or cognitively disabled and deaf.

“[Augie] is for people mainly that are in wheelchairs or that don’t have full motor function, Witkoski said. “So I have to teach him 30 basic commands while I have him, from basic sit and stay to being able to jump up on your lap so you can tuck stuff into his vest pockets.”

Rowan CCI President Lauren Foster said the puppies’ personalities are completely different, but the volunteers know how to handle their own dogs.

“They have such a personal relationship with the dogs now,” Foster said. “[Puzio] studied an insane amount in a short amount of time before she got Treat, and I think the dogs are beyond where we expected them to be at this point.”

The raisers typically care for the dogs for a year and a half, then return the animal to CCI where advanced trainers teach them commands like turning on light switches or carrying groceries.

“The first day I was there when I went to pick him up, the people said, ‘Try not to get too attached,’” Witkoski said. “Then they brought him out and I was like, ‘I love you,’ my heart just melted. I’m going to cry when I have to give him up. It’s like giving up your best friend. But he’s going to a better cause. I love him, but I don’t need him. Someone else needs him.”

Both the Rowan puppy raisers are commuters. The current problem is that club members living on campus are not allowed to keep dogs in dorms despite the rapidly increasing interest in CCI. Puppy raisers receive ID cards to keep in their wallets which explain the presence of their dog. These cards also describe the CCI organization, but the Office of Residential Learning & University Housing still does not approve.

“It’s a shame, but it’s just the rules right now and we’re trying to get them changed,” Witkoski said. “I don’t understand because when I picked [Augie] up, I got all of the documentation that says he’s supposed to be with me and he’s allowed to go places. At [University of Delaware] they’re allowed to have the dogs and none of the buildings have burned to the ground yet.”

The members have been working with Rowan lawyers while talking with the housing department. Nexus, the owners of 220 Rowan Blvd., have been more cooperative according to Foster, but they still have to follow Rowan’s rules.

“You can have service dogs if you yourself are disabled or are training them, but [housing] specified training them as being an employee, and we’re not paid, so we’re not employees,” Foster said.

After CCI became chartered at the Student Government Association (SGA) meeting on Monday, Feb. 29, they were optimistic any difficulty will be resolved. If they approach the issue now, Foster believes they will be able to get housing on board next fall. Foster said she thinks housing has a bad impression of the animals because they do not understand that they are trained and bred to be well behaved in order to be service dogs.

“We’re expecting they’ll be willing to talk because they’ll have an understanding of what CCI is through SGA and know that they’re not just pets that we’re trying to bring in,” Foster said. “I think [housing doesn’t] understand what service dogs are and they think we’re just doing it so we can have puppies in our rooms.”

Witkoski said no one has ever had any issues with Augie’s presence while taking him through his daily routine.

“When I talked to most of my professors they were like ‘A puppy? Yeah, bring him!’”

Witkoski said. “And the professor I have on Thursday night just loves him to death.”

Club Advisor Robin Brelsford— who admits she is known as “the crazy dog lady” on campus— is raising her twelfth dog for The Seeing Eye, Inc.. She used to be the advisor for The Seeing Eye chapter at Rowan, which was discontinued partially due to the housing constraints.

“I was really excited to get involved in supporting and helping students raise service dogs again,” Brelsford said.

“I’m hoping more people see [Augie] and ask how they can do it and we have more turnouts at our meeting,” Witkoski said. “You see the dog and think ‘Oh wow, maybe I can raise a dog too.’ If we can work on housing who knows—it’d be great to give dogs more homes.” 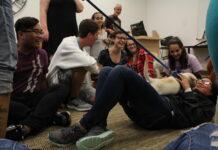 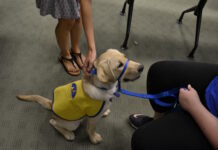