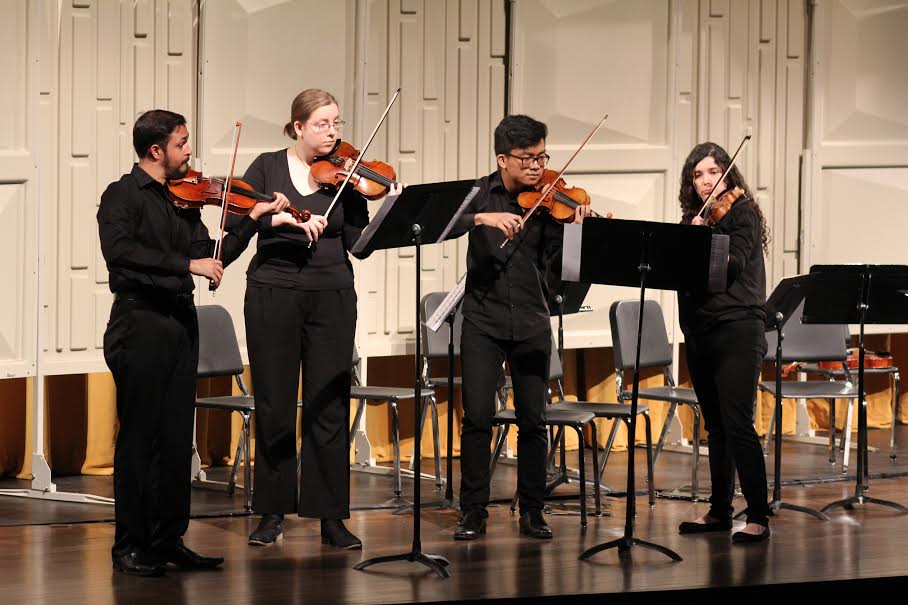 The Rowan String Ensemble performed a concert featuring a wide variety of music in Pfleeger Concert Hall at Wilson Hall this past Sunday.

The group played music from several different eras, including classical and modern pieces. The variety of music makes string ensemble an interesting group to be a part of in comparison to other groups, said Rachel Johns, a junior music education major and violinist in the group.

“We get to play a wider range of songs than we do in orchestra because we play a lot more short pieces, so we get to do a wider variety of styles,” Johns said. “Whereas in orchestra we do larger symphonies and bigger things like that. Even though [orchestra] is much more intense, we get to do more variety here.”

The ensemble even performed an original piece written by one of the members of the group.

“The most rewarding part was performing ‘Still and Starlit,’ which was composed by Michael McGuckin, the bassist in the string ensemble,” said Shannon Bradley, a sophomore music education major and violin player. “I was delighted to take part in bringing his piece to life, and I hope that he was happy with the performance.”

The group began rehearsing for this concert at the beginning of the semester. Rehearsal is held every week to allow for ample practice time for students of all levels.

Atanasiu, who has conducted all over the world and most recently in Asia, finds his work with Rowan University students the most gratifying.

“The most rewarding part was you start and you realize how much better the kids are getting,” Atanasiu said. “As the students start getting acquainted with the music, they start getting initiative. When you get them into it and enthusiastic, that’s the biggest reward.”

Much of string ensemble’s success stems from the musicians’ dedication and love for the music and their instruments, according to violin player Allison Gilbert, a freshman math education major.

“I’ve only played in high school orchestra,” Gilbert said. “Usually it’s people just taking the class to get an A. It’s nice to play with people who actually care about the instrument. Since I’m not a music major, I like how they’re welcoming of other majors and they don’t judge you because you’re not a music major.”

The audience consisted of family of musicians as well as students of Rowan. Some students came because they particularly enjoyed this genre of music, such as Kaitlyn Gaffney, a freshman writing arts and modern languages and linguistics major.

“I loved it,” Gaffney said. “I love classical music, and the ensemble had a great repertoire. A lot of Rowan talent was featured and I appreciated that.”

The hard work and dedication of the musicians was evident to Rachel Gentile, a freshman political science and economics major.

“I really enjoyed it,” Gentile said. “The music was very beautiful and well-performed. It was clear the musicians put a lot of effort into it.”

By the end of the concert, Atanasiu was ecstatic at the quality performance his musicians delivered after months of rehearsal.

“I was very happy and very glad they all did a wonderful job,” Atanasiu said. “They did very well in terms of playing the music that was presented to them. I think overall it was a really great concert. At the end I could see they were all happy and exuberant that the concert went well.”

– Featured image: Four violinists from the ensemble open the show with a song by G.P. Telemann. The ensemble featured violins, a viola, cellos, a bass and an organ. -Assistant Photo Editor/Amanda Palma