It took the 2016 Profs just two games until they suffered their first loss.

A six-game stint in North Carolina proved unfriendly to Rowan, as the team came home with a losing 2-4 record.

Despite the losses, the talent on the team is there and they still earned a top-25 ranking in the first week, coming in at No. 19. The eight days that the brown and gold have before their next contest on Friday, March 11, should provide ample time to hone in on their mistakes.

“Obviously it wasn’t what we had hoped for going down to North Carolina,” All-American shortstop Shilah Snead said. “[The break] will give us time to focus, look back on what we did and what we need to improve on.”

One facet of the Profs’ game that must be polished up is the pitching staff. It was heralded as one of the top units in the country before the season, but it surrendered a shade under eight runs per game (7.8) during their trip at North Carolina. The Profs’ highest run total allowed last season was only eight.

The defense did not completely hold up either. Rowan committed three errors in the second inning of an 11-4 loss to Berry College on Saturday, Feb. 27.

“The defense wasn’t as clean as it should have been,” Snead said.

Still, an appreciated development from the newly formed middle infield did arise. The combination of Snead and freshman Carly Anderson combined for four double plays on the weekend.

Anderson is a natural shortstop who is still adapting to life on the other side of the diamond at second base.

“I think I’m getting better at the position. I know that I can trust her, and that she can trust me,” Anderson said. “At first I was a little nervous because I wasn’t sure that I’d be able to play [second base], but as I worked I became more comfortable.”

She has even added a new wrinkle to her offensive arsenal: power. Anderson leads the Profs in slugging percentage (.864) and home runs (3), and is tied for the team lead in RBI with six.

“I never [hit for power] in the past, I was always more of a line-drive hitter,” Anderson said. “As I work more on my swing and work more outside of softball, like lifting and getting better mechanics, I think I’ll be able to hit more for power.”

The Profs will need their lineup to start supplementing the freshman’s production if they want to replicate last year’s success. Their current run production, 5.3 runs per game, would have ranked fourth in the conference last season.

Rowan’s next dozen games will require yet another road trip. This time the Profs will head to Kissimmee, Florida for a week at the Rebel Spring Games, which is something Snead sees as a positive.

“This is all working toward the end goal, which is to be a national champion,” she said. “Playing those 12 games down there is eventually going to help us when we play in the national tournament.” 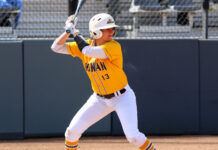 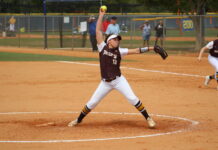