Ah, the word that every women has been called at least once in her lifetime. Whether in a joking or offensive manner, slut shaming has become a rising epidemic and is almost second nature to our generation.

Picture this: You and your girlfriends decide you want to have a night of fun. So you decide on a college party and start to get dressed. You wear your favorite crop top and leggings, with either boots or sandals, depending on the season.

You’re at the party, feeling good, when you notice a group of guys and girls staring at you with their buddies and cracking smiles. You automatically think, “Wow. Either I’m really hot right now, or they think I’m some kind of slutty joke.” So, you try to shake it off and start dancing with your friends. A guy approaches you, and if you decide to turn him down, he either tries to hop on one of your friends, or insults you saying, “My bad, but you’re dressed like a slut.” As if what a woman chooses to wear subcategorizes what type of woman she is, or if being a ‘slut’ is the worst thing someone can be.

Here’s the thing, there is nothing wrong with a woman who likes to “sleep around.” And no, that doesn’t make her a slut; that makes her a human being who enjoys casual sexual relationships with other human beings. Why is it not okay for a woman to walk around town with a crop-top and booty shorts, but it’s perfectly acceptable for a man to run around town shirtless in spandex? It’s as if society is telling women that they are the living contradictions to their male counterparts. It’s like saying to all the women out there, “Hey! You’re really sexy when you wear barely any clothes, but that also means you’re pretty much slutty and have absolutely no moral standards.” What kind of paradox is that? Believe it or not guys, “sluts” can have standards.

Don’t listen to Google’s dictionary meaning of the word ‘slut’. Don’t consider yourself a “whore” or “unclean” just because you enjoy casual sexual relationships, or because you don’t wear turtlenecks everyday of your life. Don’t let anyone objectify your own personal standards, just because yours doesn’t match theirs. 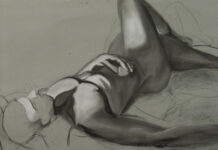 Decker: Confessions of a nude model with a body image problem