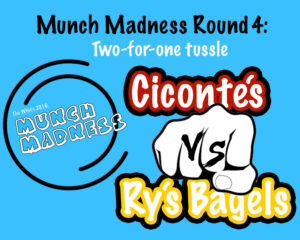 We’re nearing the end of our humble little food bracket. We’ve seen the lesser restaurants fall away like crumbs off the breadstick of competition, and on to the cold, hard floor of defeat. We’ve seen huge upsets, and even bigger upset stomachs. Let’s just say that several of the restaurants had some spicy food. Now, as the competition comes to an end, and the main course is cleared away, it’s almost time for dessert. But until we dig in, there’s still the matter of a few Munch Madness results to get through…

Ciconte’s pizza didn’t hold back, doughing all that it could to wine and dine PB’s before finally emerging victorious. The pugilistic pizza palace kept ordering more and more food off of the most expensive parts of the menu, barely even made eye contact with its competition, and at the end of the night, dined and dashed, skipping out on the bill, and forcing PB’s to do dishes in the back as repayment. This sets up a titanic clash with last year’s defending champion.

Samurai Sushi went into the semifinal a huge underdog, and when the flour settled, it was left singing “Ry, Ry miss American pie.” The bagel store gave this last samurai all it could handle, and overwhelmed it in the voting by a huge margin. Ry’s defense was not spread too thin, and they ended up with a sizable lox on the competition. They look to be the favorites heading into the final week of Munch Madness, but we can not say for certain that they won’t get cut under pressure, like a finely toasted bagel meeting the blades of a slicer. Look in next week’s paper for the final results.