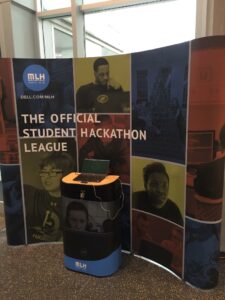 Students came from New Jersey and Pennsylvania to kick off spring break by racing to create new technology at Rowan’s first hackathon. The new event dubbed “ProfHacks,” was hosted by Rowan’s student branch of the Institute of Electrical and Electronics Engineering [IEEE].

The main objective of a hackathon is to create a device, program, or a hybrid of both within 23 hours. Once finished, participants present their products to a panel of judges. The winners were decided based on the technical difficulty, creativity, and design of the final product.

The judges took into account how the product fits the theme of the event. ProfHacks’ theme was about how the internet, technology and data are intermingling in the world. The three main categories were sensor journalism, the quantified self and smart buildings. Students were encouraged to build their projects based around one of these categories.

Nick Felker, a junior electrical and computer engineering major at Rowan, was one of the main organizers of ProfHacks. He took inspiration from other hackathons around the country.

“We weren’t sure if we would be able to put on the event because we wouldn’t have enough money for food and stuff,” Felker said. Eventually, they acquired sponsorship’s with Major League Hacking, the IEEE Philadelphia Section, the New Jersey Tech Council, and several more to kick-start their first hackathon.

For most students, it would be their first time attending a hackathon, a majority of which had little preparation. Many did not have partners, even as they signed in on the day of the event. ProfHacks held sessions to help them find partners and guide them through their projects.

“We had no idea what we were making when we got here,” says Chris Green, a sophomore electrical and computer engineering major at Rowan. “Then, we kind of scrounged up an idea that’s actually turning out to be pretty cool.”

Green and his teammates worked on a smartwatch that can alter the temperature and lighting in a room to a person’s preference.

“We’ve had a lot of little road bumps but we tend to get over them with a lot of duct tape in the form of… hastily written programs,” Green said.

They ended up calling their technology the “Comfort-Meister.”

“It’s been pretty successful so far I think,” Green said about the hackathon. “People here seem to be really enjoying it and there’s a lot of cool stuff happening.”

Green and his team went on to win in the “Best Smart Buildings” category.

For the whole event, first place went to the freshmen duo of Eric Pauley and Andy Luo, both double majoring in electrical engineering and computer science at Pennsylvania State University, also winning for “Best Dev Tool.”

They created “Cold Cubes,” a 3D human interface device, made with a box covered in aluminum sheets and basic circuit components. They demonstrated the device by putting one hand inside the box and interacting with a computer interface projected onto a screen. With their hand acting as a cursor, they clicked and dragged an object on the screen.

“The main thing that makes it work is that every single side of that box is a plate of a capacitor and your hand actually serves as an electrolytic,” Pauley said. “Your hand is modifying the behavior of the capacitor just ever so slightly.”

They hope to market the Cold Cubes to schools for educational purposes. The low cost makes it accessible over more expensive devices.

The most frustrating obstacle in building the Cold Cubes was working with the game engine, Unity, which they used for programming, said Pauley and Luo. They had little experience with Unity beforehand, but were glad to have learned about it throughout their project.

Even with the stress of the competition, students had the opportunity to have fun, relax, and chat with one another.

ProfHacks provided meals, drinks and entertainment to keep students awake. They had slideshow karaoke – which teaches people how to think on their feet while using a PowerPoint in an effective way – and a “Smash Bros. for Wii U” tournament at 3 a.m.

There was pizza at midnight and at 4 a.m. Ben & Jerry’s ice cream to keep students working through the night. Though many students succumbed to sleep in chairs, benches and sleeping bags, others powered through the night. A few packed up and left before dawn.

The hackathon brought students together to build real-life technology on a tight deadline. There’s hopes that ProfHacks will continue in years to come.

“Rowan needs to have its own hackathon because we do a lot of really great things here and we have a lot of great students here,” Felker said. “And we got to take that experience to Rowan and get more students involved.”

– Featured image: ProfHacks pit students against students to create a new technology within 23 hours. The hackathon theme was about how the Internet and how technology and data are intermingling in the world.  -Staff Photo/Anthony Medina 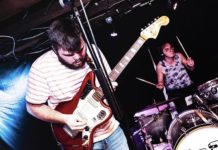