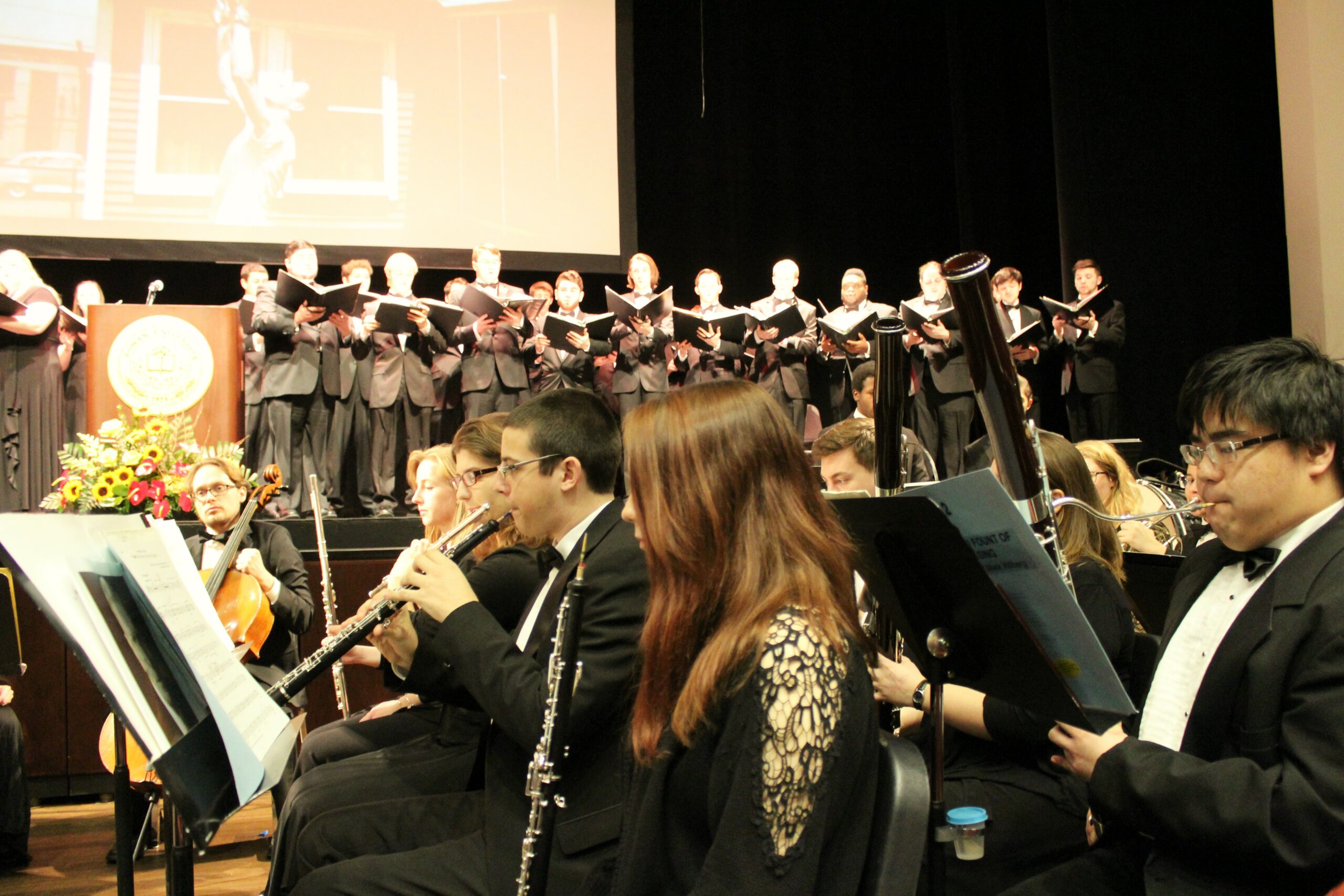 On Thursday, the Rowan Wind Ensemble combined Electronic Dance Music (EDM) with orchestral pieces for the first time in Rowan’s history during their “Man vs. Machine” concert in Pfleeger Concert Hall.

The March 3 concert featured pieces from various decades, ranging from the early 1900s to the current 2000s. The earliest piece, “Adante Pastorale,” was written in 1902 and featured guest voices from Natalie Gattuso and Christopher Thomas, Director of Choral Activities and Assistant Professor of Music at Rowan, respectively.

“Mothership,” composed by Mason Bates in 2011, inspired the theme of the concert due to its incorporation of EDM and sound effects in addition to the natural acoustic of traditional instruments. The song also featured solos by several of the ensemble members, preceded with a sound resembling a spaceship door opening. This is the first time Higgins and the wind ensemble used computer-generated sounds within their performance.

The other songs in the concert were chosen to fit around “Mothership,” creating a concert about how music and machinery interact.

“I think in every field, we’re at an intersection of how technology is going to affect the future of their field,” Higgins said. “Music is not exception to that.”

Higgins’ choice to use modern music is not only meant to appeal to the audience, but attract members of wind ensemble as well.

“My favorite part [of wind ensemble] is probably the amount of new music we get to play,” says Dylan James, a junior music performance major and clarinet player. “In orchestra and solo groups it’s more old, established music. [In wind ensemble,] we get to premiere new works all the time and play new works by new composers and that’s really exciting.”

The ensemble orchestra began preparing for the concert at the start of the semester in January. In addition to weekly rehearsals as an ensemble, many performers need to practice individually.

“I have had to practice on my own, so at least 20 minutes a day on the ensemble repertoire,” James said. “Additionally, I rehearse with my section on the side, so maybe an hour or so every few weeks we spend and make sure we have the parts as a section.”

After weeks of practice, the wind ensemble performs for an audience consisting of family, friends, and Rowan faculty and students. While a positive audience reaction is striven for and always greatly appreciated, many musicians find a greater reward solely in playing their music.

“The most rewarding part is to be connected to something that’s so surreal and so hard to describe in any way besides the way you hear it,” James said.

The appeal of the concert, according to 22-year-old Maria Simione, was the blend of older and more current music.

“I loved how different it was,” Simione said. “Rather than it just being a classical piece, it was a mixture of modern and classical, which was really interesting, especially for younger people in the crowd.”

Many audience members connected to the theme of “Man vs. Machine,” reflecting how it affects their own life and society around them. Shannon Bradley, a sophomore music education major, is especially familiar with how modern technology affects music.

“It makes me think of how, as a musician, you can be very machine-like and you can try to get all the notes correct and all the rhythms correct, but then there’s also a very human part of making music where you want that emotion and you want that expression,” Bradley said.

“We’re so focused on machines now,” says Aniza Adkins, a junior music education major. “How many more things are we going to get machines to do so people don’t have to do them? We can get machines to make music for us but it will never be able to replace being in the concert setting listening to live music played by live people. I think it’s just really telling what is important to us as people now, like can we make our machines more man-like. How do we keep people from becoming machines?”