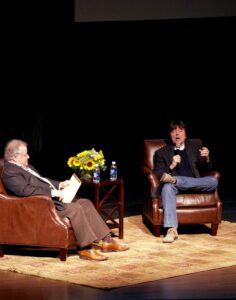 Emmy award-winning documentarian Ken Burns, spoke at Rowan University last week as part of the President’s Lecture Series. The talk focused on what inspired Burns to become a filmmaker, his failures, his successes and his future projects.

Held in Pfleeger Hall on Feb. 29, Burns was interviewed by television critic and Rowan professor, David Bianculli. Burns said that he knew he wanted to make films around 12 years old when he saw his father cry watching the movie “Odd Man Out.” It was then that Burns saw the power that movies could have on people. Despite being inspired by the effect the 1947 drama film had on his father, it was Burns’ love for sharing historical tales that drove him to the success he has today.

Burns opened up about the difficulties of finding a balance between telling facts and telling the story well and truthfully while still being entertaining.

“The way we stay alive, the way we deal with our mortality is by telling stories,” Burns said. “They live beyond us. They’re not mutually exclusive…The laws of storytelling stay the same.”

Burns talked about how he and Steven Spielberg once discussed the laws of storytelling, and how they stay the same for both of them. The only difference being that Spielberg can make things up while Burns cannot.

But Burns never finds himself without a story to tell. He’s currently working on 10 different projects, including films on the first African-American baseball player Jackie Robinson, the Mayo Clinic, the history of country music, and the Vietnam War.

Bianculli attributed Burns’ success to his ability as a good storyteller and his dedication to telling the story in the most emotional and honest way possible.

“Usually he goes at it from the bottom up, rather than the top down, and lets the story tell him what it is,” Bianculli said.

Bianculli also talked about why so many people respond to Burns’ documentaries the way that they do.

“He really is a master at editing and at using music and scoring and using voices,” Bianculli said. “And then the whole structure of the story but a lot of the brilliance is figuring out what the story is and it’s very complicated sometimes but he wants to make it as clear as possible.”

Thomas DiNapoli, a sophomore radio, television and film production major shared that his favorite Burns documentary, which was the reason why he attended the event, was “Baseball: The Tenth Inning,” a film about the history of baseball.

“With athletes, they get glamorized,” DiNapoli said. “Burns talked about the non-glamour athletes and they give a whole in-depth interview. Not only are you getting something about Mickey Mantle. You’re getting Mickey Mantle’s backup for three years and his baseball life.”

Mike Poiesz, a sophomore public relations and advertising double major, has not seen a documentary made by Burns, but is intrigued to see one after seeing him speak in person.

For journalism junior Summer Sheekey, though, the main idea from Burns’ talk is to keep moving forward and to not doubt yourself.

“I liked what he said about perseverance and persistence,” Sheekey said. “A lot of people in this industry have a tough time, get a few rejections and give up. I liked how he said to have confidence in yourself no matter what.”