Head coach Derick “Ringo” Adamson says he has a handful of athletes that will compete for top spots in multiple events at the New Jersey Athletic Conference Championships on Monday, Feb. 22.

In that group are standouts senior captain Shailah Williams and freshman Aspen McMillan.

“Basically I’m going to lay this whole conference meet probably on four to five girls’ backs, and fortunately one of them is a freshman, that’s Aspen,” Adamson said. “She’s going to handle the 60-meter hurdles, the 200 meter, the 4×200, and there’s a good possibility she could run in a 4×400…”

The two are not heading into the conference final quietly, either.

For the second-consecutive meet, Williams and McMillan placed first in at least one individual event. This time it was at the DeSchriver Invitational in East Stroudsburg, Pennsylvania on Saturday, Feb. 6, where Williams won the 55 meter dash with a time of 7.24 seconds, and McMillan the 55 meter hurdles in 8.57 seconds; both times are season-bests.

“[Aspen’s] way ahead of herself. I’m telling you, for a little freshman, she is so focused,” Adamson said.

The coach explained that the meet hosted by East Stroudsburg University gave him some leeway to put in different girls, some who maybe haven’t gotten looks in certain events at other meets.

“They allowed me like four or five [athletes] in events, most meets will only allow me two or three, which then cuts down on how many people I can take,” Adamson said. “When I get the opportunity to run four or five people in events, it suits this team very well considering for conference when we have to fill a lot of events, four-deep.”

“So strategically when I go to plan now for that conference meet, I know where to put kids.” 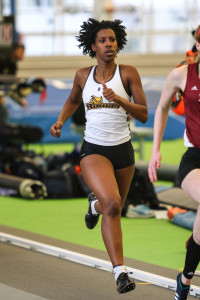 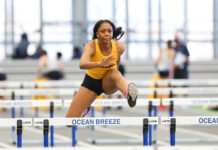 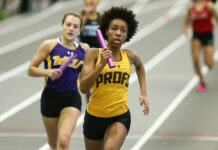