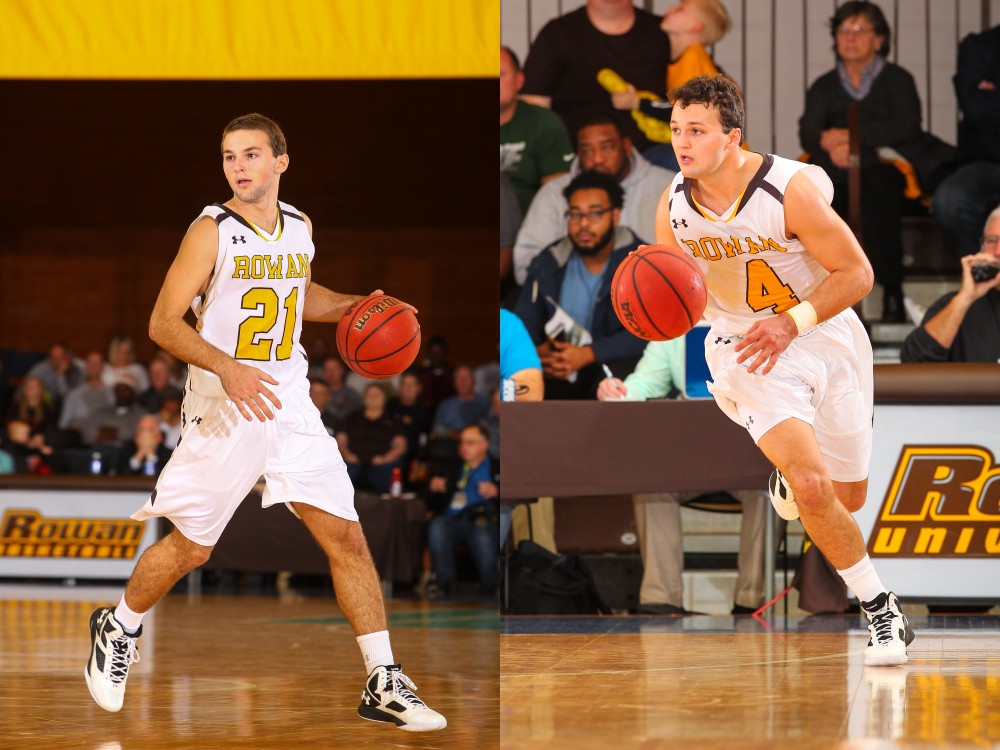 Ever since they were little, twin brothers Rob and Nick DePersia have been rivals.

Their dad, Rob DePersia II, who was a longtime basketball coach at clubs all over South Jersey, got his boys involved in sports at a young age. Growing up in Cherry Hill, the two tried their hand at football, baseball, soccer and basketball, before eventually falling in love with the same game their father did.

Nick says that his dad made the game fun for him and his brother; he would take them out after practices to shoot around and work out. His passion would soon spread to the twin brothers, as gradually one-on-one pick-up games in the backyard started to carry more meaning.

“Those are probably the best games, those one-on-one games, because there’s so much emotion towards it,” Rob said. “Sometimes when we go out to play we end up in fights and don’t talk to each other for the rest of the day.”

“We play for pride, so whoever wins gets bragging rights for the rest of the day,” added Nick. “It’s all fun and games though; we’re just trying to make each other better.”

Over time, the DePersias’ friendly spirit of competition would inspire them to better their game every chance they could get. They began playing recreationally at Rosa Middle School, before transferring to Haddonfield High School to play for veteran head coach Paul Wiedeman.

Like any incoming freshman, the twins had to earn their spot on the Bulldogs’ roster.

Unlike any incoming freshman, they made the starting five.

“They came in with a great work ethic, great character and a tremendous attitude,” Wiedeman said. “They had to earn their spot and they really impressed early on.”

That season, the Bulldogs competed for a South Jersey title but fell short to Willingboro High School. The loss stung for the standout freshmen, and they would use it as a driving force to enhance their game for the next three seasons.

“I get really upset when we lose games; I hate losing,” said Rob. “But I learned that we have to learn from those games and improve on our mistakes.”

The DePersia brothers would win 97 games in their four-year high school careers. Both got their names in the 1,000-point club at Haddonfield.

They won the Colonial Conference all four years, including an undefeated regular season their junior year. Nick and Rob returned to the SJ Finals during their senior year, only to fall four points short to Camden.

Rob is second all-time in assists and has the most free throws attempted and made in Haddonfield history. Nick was the third-highest scorer and made the most three point field goals in school history.

“So yeah, we had pretty good careers,” Nick said with a laugh.

Aside from the stats the twins racked up in their time at Haddonfield, Wiedeman says they had an even bigger impact on the program as a whole.

“They changed the program around and helped take a tough, defensive basketball team into a team that could press you on the defensive end and turn turnovers into points,” Wiedeman said. “The effort, enthusiasm, love for the game and attitude they displayed was infectious.”

The twins received a lot of recruiting attention from colleges throughout their high school careers, so when it came time for them to start thinking about their respective futures they had a lot to consider. However, considering what the twins were looking for in academics, athletics and location, only one school really made sense.

After seeing the coaches at their games, learning about their expanded engineering program and listening to the stories of their coach’s 1993 Division III Final Four run, the DePersia brothers decided they wanted to be Profs.

“[Coach Wiedeman], he played here, and he was a big influence on Rowan for us because he said he loved the school and it would be a great fit,” Nick said. “He also talked to us about coming here, and he talked up the coaches and everything for us too.”

“17 years coaching at Haddonfield and this is the first time I had anyone go to Rowan,” said Wiedeman. “But [Rowan] had everything they were looking for. I don’t know that I was the determining factor.”

When the two brothers showed up for their first day of practice as members of the brown and gold, they had found themselves in the same situation they had at Haddonfield four years prior: they knew what they were capable of, but they still had to earn their spot on the team.

And just like they had done before, Rob and Nick DePersia made the starting five as freshmen for Rowan.

“Their reputation preceded them,” head coach Joe Cassidy said. “There was never any question about their attitude or their work ethic, and they came in and earned their spot.”

When asked if the DePersias were the type of team a coach can build around, Cassidy didn’t shy away.

Not only are the twins finding success on the court at Rowan, but they are finding success as students as well. Nick declared to be a civil engineering major after taking an engineering elective his senior year at high school and enjoying the work. Rob was unsure about his major, but not to be outdone by his younger sibling—by seven minutes, he likes to remind him—declared a major in biomedical engineering and is enjoying his course work thus far.

Wiedeman wasn’t surprised to hear they had quickly found success.

“They practice hard, they’re great kids, they’re great students and people are attracted to that,” Wiedeman said. “Our season started about a month and a half after them so I was able to go out and see them and I’m happy to see them doing very well.”

The Profs still have four games left in the regular season to try to earn a playoff spot, and the twins are confident their team can rally and make a lot of noise in the postseason. Both Rob and Nick have stepped up their production as they continue to adjust to the college level of play, and they agree they still have yet to play their best.

Even so, there is no absence of the competitive spirit that got these two where they are today.

“I know other teams don’t want to play us in the postseason because we give everyone a tough game,” Nick said. “At the end of the year, you want to play your best ball, and we think we can do that.”