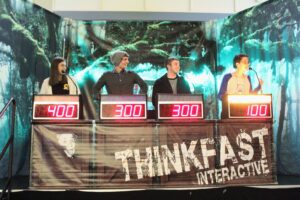 The Thinkfast Trivia Night returned last week to the Chamberlain Student Center Pit, bringing students together for a night of knowledge, fun and competition.

The event, provided by Rowan University’s Office of Student Activities [OSA] and Rowan After Hours had students competing for a $200 cash prize through various types of trivia questions and activities.

Students could choose to compete either in groups up to four or as individuals. By the time the event got underway, there were roughly 70 students divided into thirty-one different teams to compete for the cash prize, according to OSA.

Thinkfast Trivia, which travels around the country under TjohnE Productions, brings various shows to college campuses all over the country. While typically their shows are any genre, they have done specific themes before – such as the Disney Thinkfast Trivia Night last semester.

“You have to challenge people, which is great,” said Alan Weiner, Thinkfast Trivia’s host for that night. “We’re having fun, but we’re all learning things. We didn’t have stuff like this when I was in school.”

Throughout the night, contestants also took part in a variety of unusual games for a trivia competition. One, for example, required players to sing 30 seconds of a song and have the audience’s applause decide the winner.

“Every year it’s been fun,” said junior physics major Jaeson Porch. “Each time is certainly better than the last.”

Porch – who is part of Rowan’s acapella group “Profecy” – won the singing competition by singing a few bars of John Legend’s “All of Me.”

As the night went on, thousands of points were racked up with the teams in top ten positions shifting after each question.

“Organizing the night isn’t the fun part. What I really enjoy is seeing the energy the game show hosts bring to the crowd,” says James Thatcher, the graduate coordinator for OSA who was in attendance that night. “It’s fun to see how participants feed off their energy and the entire night becomes fun and full of action,”

Come the end of the night, the four contestants left up on stage were going back and forth until only one victor could claim the $200 cash prize. After lightning fast bursts of knowledge, the winner was finally decided: Maeve Forde, a junior history major, placed first overall after securing her spot in the final four early on.

“It’s fun, it’s cool, I’ve never won before!” said Forde. “Everyone seemed to have a good time. This event is always fun when it happens and it’s cool to have fun and also learn a little something.”

For Forde, the most exciting part of the night had nothing to do with the fun facts.