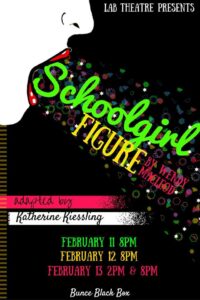 This short, dance-heavy play explored themes of female body image and eating disorders in a way that diverged from the norm, as the play was actually presented as a dark comedy.

MacLeod’s “Schoolgirl Figure” focuses specifically on two girls — Renee, played by Savannah Bruno, a senior theater arts major, and Patty, played by Kelsey Romeo, a junior double major in theater arts and public relations. Both struggle with problems related to poor body image and eating disorders, and they are constantly being judged and tortured by their classmates about how they look. Renee, in particular, feels that the way her body looks is especially important when it comes to getting attention and later relationships with boys.

Throughout the show, Renee and Jeanine — another girl who battles with anorexia, played by Sarah Cheng — battle for “The Bradley,” played by Mike Grubb, who they think is the hottest guy in school. In the show, The Bradley becomes available after his girlfriend, Monique, played by junior health promotion fitness management major Christiana White, dies of anorexia. Bradley reacts to Monique’s death nonchalantly, claiming that this is the third girlfriend he has lost due to an eating disorder.

“[Monique] wasted away trying to be someone else’s version of perfection in terms of body type,” White said about the character.”Eating disorders are sometimes glamorized, so she is more of a ‘this is what could happen to you demonstration.”

By the conclusion of “Schoolgirl Figure,” Patty has learned to love to eat and wins over The Bradley because of her acceptance of herself and figure.

“By the end of the show Patty breaks free of [body disorders] and realizes she’s a size eight and her body is absolutely fine. [She] says, ‘This is who I am’,” Romeo said.

Kiessling said she was first drawn to the script of “Schoolgirl Figure” her sophomore year at Rowan, when she performed a scene of the show in one of her acting classes.

“[MacLeod] was able to find the dark humor in [eating disorders] which I think speaks to how we as a society tend to view these things,” Kiessling said. “We glamorize and sexualize the human body in so many ways, but at the end of the day, what is that really perpetuating?”

“Schoolgirl Figure’s” cast of eight only had three weeks of rehearsals and one week of technical rehearsals to put the show together, as this show occurred early in the Spring semester.

“I hope the audience takes away that underneath the humor of the show,” Kiessling said. “[the audience] can see under the cracks what is really there and really question themselves on how we all help or hurt this cause of body image.”

“I feel that it is important for any girl/woman no matter their outward appearance, should be confident in who they are and not feel the need to change to fit in with a particular crowd,” Selig said. “Just like what happened in ‘Schoolgirl Figure,’ there is always someone who will find you beautiful the way you are.”

In a show that focused on eating disorders and body image, cast members felt the experience of being in the show was also a generally positive one.

“Everyday we’re going in and being pushed to our limits and doing disturbing things with our bodies,” Romeo said. “But through it all we’ve been so supportive and everyone in the cast is really there for each other. I don’t think you could do a show about body image without such a supportive and positive cast.”