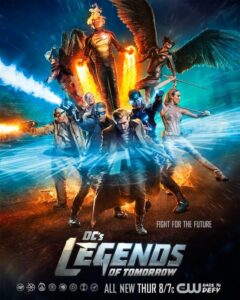 “DC’s Legends of Tomorrow” follows Rip Hunter [Arthur Darvill], a rogue time traveler from the future who assembles a team of heroes and villains from both the “Arrow” and “The Flash” television shows, as they travel across time to stop Vandal Savage [Casper Crump] from destroying Earth in the 22nd century.

With the Justice League film still a long ways away, “Legends of Tomorrow” should hold viewers until then. The team-up episodes of “Arrow” and “The Flash” are arguably some of the best out there

In Hunter’s time machine, the Waverider and the team travel back to 1975 to talk to the one man that could lead them to the whereabouts of Savage: Dr. Aldus Boardman [Peter Francis James]. Dr. Boardman is an expert in the ancient story of Hawkgirl, Hawkman and Savage, all of whom we get to see beforehand in an episode of “The Flash.”

I enjoy that the writers are using the story of Hawkgirl, Hawkman and Savage to create a more personal story than just the typical “save the world” plot. The twist with their story was a good curveball that I bet no one saw coming; it gives Hawkgirl and Hawkman another reason to go after Savage other than the fact that he is out to kill them both.

But can this team even work together?

As the team was split up later in the episode, the ship came under attack by the time-traveling bounty hunter Chronos. We got to see that the team as a whole really doesn’t know how to work together, though we do see some teamwork as Hunter lays down cover-fire for the Atom and Stein so they could get to the ship.

I really can’t tell where Captain Cold and Heat Wave will go character building wise; this is especially true for Heat Wave, as he is played more as a maniac that loves killing, fire and money. While Captain Cold has been set up in “The Flash” as more of an anti-hero. I feel like the team is disjointed at the moment, but it is the first episode of 11 so we have to see the team blossom.

I’m still a little confused by the way Stein and Jax act in this episode. Jax seems a bit moody in the beginning; he acts as if he is a troubled teenager that doesn’t want to listen to his dad. While Stein drugs Jax’s drink to get him on Waverider, it all seemed out of character for both of them. Stein is an all around good man who would do no harm to an innocent person. So to drug his friend really just made no sense.

We don’t get to see Savage much in this episode, only in the very first scene to set up the future and the end of the episode. For a character that is going to take over the entire world, he’s not very frightening like Zoom from “The Flash” or Damian Darhk from “Arrow.” I would have liked to see him more to show off how evil he actually his.

Overall, the first episode does well to set up the plot, while introducing the team as a whole for new viewers of the show. Leaving the viewers with some avenues to explore later. Who are the Time Masters? What or who is Chronos? Will time completely change if Savage is defeated? I have high hopes for “DC’s Legends of Tomorrow” and if you are a fan of “Arrow” or “The Flash” it is a must see.