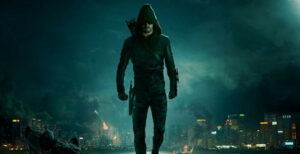 Darkness has fallen upon the heroes of Star City.

After the Ghosts, a mercenary offshoot of the villainous organization H.I.V.E., cornered the limo Oliver Queen [Stephen Amell] and his fiance Felicity Smoak [Emily Bett Rickards] were in, they opened fire. With Felicity presumed dead, the Emerald Archer has set out to find her assumed killers and bring them to justice.

While the Green Arrow and the rest of his team seek out Felicity’s alleged killers, the supernaturally-powered Damian Darhk [Neal McDonough], the leader of the Ghosts, plans on bringing Star City and the world to its knees.

The opening of this week’s installment returned us to the unknown grave that Oliver and Barry “The Flash” Allen [Grant Gustin], had visited at the start of this season, which many had assumed belonged to the tech-savvy Felicity after what transpired in the last episode.

We thankfully see Felicity’s mother and the rest of Team Arrow at her bedside while she is in the hospital recovering from her injuries.

Oliver, in the meantime, has sought out a path of violent retribution and vengeance in the name of his wounded fiance. It’s interesting to see that even after having come so far as to establish a ‘no-kill’ rule akin to Batman, that without Felicity Oliver has no moral compass.

As Anarky [Alexander Calvert] returned to wreak havoc on the city as well as Damian Darhk’s forces, John Diggle [David Ramsey] attempts to reconcile with his estranged brother Andy [Eugene Byrd], who had been working for the Ghosts after he was presumed dead.

While Team Arrow needed Andy as a resource for where Damian Darhk was located, it was almost painful to see Diggle going off on his brother, beating him until his knuckles bled after a vicious interrogation. They then realize that while they were one step behind the Ghosts, Anarky was one step ahead of him.

After tracking him through various leads, the Green Arrow and company come to the residence of Darhk himself, where Anarky was holding his wife and daughter hostage in their own home.

After a fight between Anarky and Team Arrow, Darhk’s family is rescued. In a break from the action, Oliver confronts Darhk, who just realized his nemesis saved his family.

“I want to be clear about something — I have shown you repeatedly that you cannot beat me,” Darhk gloats to Oliver.

“You saved my family. So I’ll give you a few weeks to spend with yours. Enjoy your time. What’s left of it.”

The biggest revelation of the start of season four’s second half is that Felicity, while fully recovered from her gunshot wounds, has suffered severe nerve damage and will likely never walk again. My major criticism of her being wheelchair bound for the remainder of her life is that she’s more like Oracle from various “Batman” adaptations than she already was. Oracle, formerly Batgirl, was paralyzed from a gunshot wound courtesy of the Joker, leaving her destined to operate behind the scenes to protect Gotham. Combine that with the handful of villains from Batman’s past like Anarky, Firefly, Deathstroke and Ra’s Al Ghul appearing at multiple points these past few seasons, I often wonder if I’m watching “Arrow” or “The Dark Knight.”

“Blood Debts” comes to a close back at the gravesite mentioned earlier, with Oliver entering his limo with Felicity inside. Felicity angrily demands Oliver to kill whoever did this to them. The episode ends with Oliver looking away, not answering her.

With this grave looming over the horizon for Oliver and company, the only guarantee is that things in Star City are about to get a lot darker. 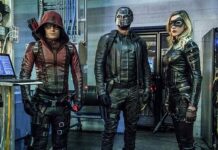 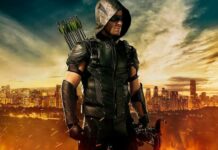