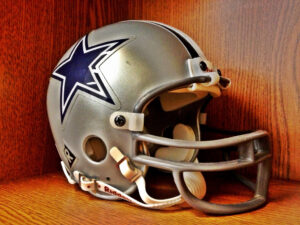 One NFL organization that has gained a lot of attention this season is the Dallas Cowboys, so-called “America’s team”. Dallas has faced numerous injuries to key players but the biggest questions center around defensive end Greg Hardy.

Hardy was a part of a league domestic-violence crisis last year that involved several cases and a number of different players. He avoided serious legal trouble and served a four-game suspension as punishment from the league for violating the Personal Conduct Policy. After being released by the Carolina Panthers, Hardy signed a deal with the Cowboys.

The highs and lows are documented.

On one hand, he has helped keep the hurting Cowboys afloat in games by coming up with sacks, a forced fumble and an interception. At the same time his behavior on the team has been concerning. During a week seven loss to the New York Giants, Hardy got involved in a sideline altercation with special teams coach Rich Bisaccia. Hardy would then have some words for other teammates, such as star wide out Dez Bryant.

Bottom line, all of these in-game tirades are not okay. This is not a good look for someone who needs to rehabilitate his image. There were already questions concerning Hardy’s apathetic attitude towards his legal troubles; these latest incidents do no one any favors.

It appears as though his careless thinking off the field reflects his on-field thinking. Hardy just does not seem to get it (the magnitude of what he did?) or understand. Don’t get me wrong, he is a fine pass rusher and would be an asset to nearly any team. However, most teams don’t want to deal with the certain amount of backlash and history that come with players like him.

Look at the Ray Rice situation for instance. Teams like the Houston Texans, San Francisco 49ers and Cleveland Browns could use his services but they don’t want to deal with that baggage. The same goes for former 49ers defensive end Ray McDonald as well. Hardy is extremely lucky, with Cowboys owner Jerry Jones even defending him and bringing up the idea of a contract extension.

If I were Jerry, I’d think twice on talking about contracts involving Hardy. I would need to see him grow and learn the error of his ways before I decide to throw money his way. Dallas should hold off on this and evaluate his situation once the offseason hits.

I see why Jerry might be eager to keep Hardy because of the talent he brings to the table. However, due to today’s climate on how everyone places a microscope on athletes and entertainers, the situation needs to be handled delicately or else this will turn out to be a waste of money and time, and the dignity and credibility of everyone involved will be put into question. So let’s hold off on giving this guy big bucks until he realizes how to cash in on chances.

Featured image: By Themeplus CC BY 2.0 (http://creativecommons.org/licenses/by/2.0), via Flickr