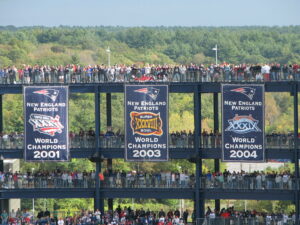 The defending-champion New England Patriots, despite all the allegations surrounding them in the offseason, are playing fiercer than any team in the league right now. They are doing so with fundamental football and with few big-name players.

While division rivals the Miami Dolphins and the Buffalo Bills pursued Pro Bowl players Ndamukong Suh and LeSean McCoy, respectively, New England chose to stick with players from their practice squad as well as take a chance on some new hopefuls.

Running back Dion Lewis emerged with new life after sitting out the last two NFL seasons, becoming one of the Patriots go-to players. The small and elusive Lewis was a strong complement to power-back LeGarrette Blount before suffering a season-ending injury in week nine.

Tight end Rob Gronkowski and wide receiver Julian Edelman are also off to good starts, averaging over ten yards per catch and a touchdown each per game.

Aside from “The Brady Bunch” on offense, New England’s young defense has stepped up to the challenge in the absence of many players from last year’s championship run. Veterans such as safety Devon McCourty and linebacker Rob Ninkovich have applied pressure in big situations to allow players like rookie defensive linemen Dominique Easley to make plays. This was apparent in a week-six game against the Indianapolis Colts where the Patriots fought back after trailing in the first half.

The biggest contenders out of the AFC this season aside from New England will be the Denver Broncos and Cincinnati Bengals.

The Broncos have the top-ranked defense in the NFL, but their lack of offensive performance is what presents the biggest problem for them. Quarterback Peyton Manning is going through an up-and­-down year and up until this point, Denver has just been able to squeeze by with its lackluster offense.

This year, the Broncos are only 42.86 percent effective in the red zone and have posted a meager 37.5 percent in their last three games. It will take a stronger effort to defeat New England, whose red zone success rate is third-best at 68.42 percent. A stingy defense can make all the difference in the playoffs but that won’t matter if the team can’t put up points.

Cincinnati is playing well right now and has the best chance of beating New England. Statistically speaking they are very similar in every category. However, a lack of leadership and clutch play in the playoffs has defeated the Bengals in the past. Cincinnati has pretty much the same roster from last year’s team, one that was barely able to manage 10 points in their early playoff exit. They are a great team, but not a great playoff team.

The NFC presents a number of good teams that could meet the Patriots in the Super Bowl. The Carolina Panthers, Green Bay Packers and Seattle Seahawks each feature a powerful offense and a hard-hitting defense.

It is uncertain who will win the NFC but come February, expect New England to take the field in San Francisco for Super Bowl 50 and return to Foxboro with yet another title.