Rowan men’s basketball overcame a slow start from the field in route to their fifth straight win after a 103-84 victory over the Cabrini University Cavaliers on Monday, Dec. 5.

It was a tale of two halves for the Profs, as the team shot just 39 percent from the field in the first half, but junior forward Ja’Zere Noel had no doubt the team would turn it around.

“I always think as far as offense, we’re in control of our destiny. Not to be cocky or anything like that, I don’t think any team in the nation could guard us,” Noel said. “As soon as we get our flow, it’s off from there.”

Even with their struggles from the field, the Profs still managed to battle the Cavaliers tight for the majority of the first half until Cabrini ended the half on an 11-4 run to put them up five and the Profs into an unhappy locker room.

“I was not happy with the way we guarded their two leading scorers, ‘cause they were leading them in scoring,” Head Coach Joe Crispin said. “It’s not like we just leave that up to one person. We make that a collective effort and we didn’t do a good job of that in the first half… I didn’t think we came out really focused.”

The Profs found “their flow” early in the second half after senior guard Connor Dickerson caught fire, scoring eight of his 16 right out of the break to keep the deficit to within four.

Rowan held the lead for the first in the second half after junior guard Marcellus Ross scored a putback to make it 62-60 with 15:08 left, but the two teams would continue to exchange the lead for the next five minutes.

“We know as a group together, there’s not a second of our mind we think about losing a game, so we continued to just keep fighting,” Noel said. “We know at the end of the day, teams don’t play the same way we play and we think we can wear them out by the end of the game.”

It wasn’t until the 10:18 mark when the Profs could finally pull away, bringing Noel and the team’s belief to fruition. Up 72-71, the Profs, led by eight of Wright’s 19 points off the bench, went on a 31-13 run to close out the game and deflate the Cabrini bench and visiting crowd.

“I’m just accepting the off-the-bench role, like the Lou Williams role, the six-man role,” Wright said. “I’m just embracing it and giving a lot of production to help my team win.”

After Monday’s win, the Profs will look to make it six straight wins as they head up to Camden to take on the struggling Rutgers-Camden Scarlet Raptors on Wednesday, Dec. 7. 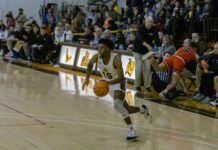