The Rowan Profs Street Hockey team started their season this past month and are looking forward to the future success of their program.

Rowan offers three different kinds of hockey to its student-athletes, DII/DIII ice hockey (the traditional way of play,) roller hockey (rollerblades and a plastic puck), and street hockey (on foot with a polyvinyl chloride ball, helmet, knee, and elbow pads).

This club team plays in the Hollydell North Men’s Dek League at Choice Inline Arena in Washington Township, down the street from Hollydell Ice Arena, the home of Rowan University’s DII and DIII men’s and women’s ice hockey teams. This year’s team is excited and ready to go for 2022.

“The talent we have on the roster, that includes new and returning players,” Co-President Zack Williams said. “I’m excited for the potential that this roster has and being able to go out there and hold our own in competition.”

Williams is ready to help lead this team in a victorious season but is always looking to improve.

“The biggest way we can improve on last year’s efforts is learning to work as a team and communicate with each other during games,” Williams said.

The team’s other co-president, Chris Marcou had a lot to say about helping lead the Profs into becoming a successful organization at Rowan, and the South Jersey area as a whole.

“My favorite part about leading this organization is to bring people together who all share a love for the sport in a very easygoing, yet competitive way,” Marcou said. “Regardless of skill level and experience, we strive to create an environment where our team is comfortable, able to play and be active weekly.”

Marcou continues to mention the importance of the team’s history and its future.

“Our organization was fortunate enough to be left in a good position when the former president graduated last year,” Marcou said. “So I hope to build on his blueprint and idea for this team. We strive to make our organization not just one of the best ball club hockey teams in the area, but a prestigious sports club here at Rowan where everyone is welcome and able to play a sport they love.”

The Profs just retired their first jersey, No. 88, dedicated to the former president and goalie, Jake Collins, who helped start the club team and pave a way for the future of the program.

If you are interested in watching the Profs in action, they play every Sunday from 6 p.m to 9 p.m. at Hollydell North in Washington Township. You can follow their season on the Hockey Shift app.

Right-handed pitcher, Spencer Strider of the Atlanta Braves have shown a glimpse of what could have been the start to a hall of fame career in his future.

Strider has become the only rookie of the Braves pitching staff since 1900, recording at least 200 strikeouts in one season. Strider has made headlines throughout the MLB by being the fastest to record 200 strikeouts in a season. He now stands in company with Hall of Famer, Randy Johnson and current phenom, Gerrit Cole. This could be the beginning of a great career for the 23-year-old, 2020 draft product from Clemson University.

Strider, best known for his mustache, was drafted twice. The first selection was in 2017 out of Christian Academy of Knoxville to the Cleveland Indians in the 35th round. The second was in the fourth round of the 2020 draft to Atlanta.

For 2020, Strider spent his season at the Atlanta Braves Spring Training site at Cool Today Park in Lake Buena Vista, FL, as the minor league season was canceled that year due to COVID-19. In 2021, he started his professional career with the Single A-affiliate, the Augusta Green Jackets.

The 6’0 foot starting pitcher only played in four games, recording 32 strikeouts in 15.1 innings before getting called up to the High-A, Rome Braves, where he pitched in three different games. After seven starts, he would call the Double-A Braves out of Mississippi home for 14 contests. Strider advanced to the Triple-A, Gwinnett Stripers for one inning of relief, striking out all three batters before making his major league debut with the Braves.

After playing for each minor league team in the Braves farm system, Strider was poised to make the show. He pitched two games in relief at the end of the 2021 season, only letting up one run and two hits in his outings. In the 2022 season, he earned a run average of 2.67, and recorded 202 strikeouts in 131.2 innings, while keeping an opposing batting average down to .180.

Spencer Strider is a name to remember as the 2022 season comes to a close, and it’s not just because we share the same name. Strider will be a household name in the next couple of years, so remember that you heard it here first on the 11th edition of “Flashing the Leather” at The Whit Online. 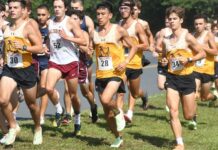