Since arriving at Rowan University, men’s swimming & diving Head Coach Brad Bowser has brought a new standard to the team– one of constant success.

Coach Bowser has brought countless New Jersey Athletic Conference (NJAC) and Metropolitan Conference (METS) Championships to Rowan since taking over the team during the 2014-2015 season. However, Coach Bowser does not let the pressure of living up to those expectations get in the way of his coaching.

Taking the business side out of the equation, Coach Bowser thoroughly enjoys coming to the pool everyday to coach his team.

“It’s always fun to watch them improve, watch them succeed, try and push themselves to the next level,” Coach Bowser said. “For me it’s a reward to come in here every day and see these guys perform the way they do and do what they love.”

Graduate student Kevin Gillooly has very similar thoughts on the matter. Gillooly loves coming to the pool every day to get coached by Bowser.

“A question that I’ve gotten more than any other question this year is why I chose to come back here this year,” Gillooly said. “I have aspirations of swimming professionally in the future, and I chose to use my last year of eligibility at Division III, and that’s kind of perplexing to some people. But really the only answer to that question is the fact that he has changed my life entirely… Brad wanted to recruit based on potential and he was able to work with me every day to hone in on that potential and give me the opportunity to potentially be a pro in the future.”

In Gillooly’s eyes, Coach Bowser is a great person to have around at all times, swimming or not.

“He’s just a goofy guy,” Gillooly said. “He’s really easy to get along with… Overall, as a coach, he’s put an incredible amount of faith in me, and he’s not just made me a better swimmer but he’s inspired me.”

For Coach Bowser, the main thing that he takes away from his experience coaching the team comes outside of the pool.

It is clear that Bowser’s accomplishments and approach to coaching have earned him the respect of the team.  Bowser’s tenure with the Profs will continue with METS this weekend. 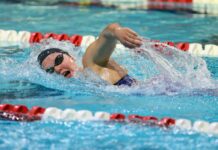