Editor’s Note: This article was updated to include the score of Wednesday night’s matchup.

With the exciting announcement that spring sports will resume this season, the women’s lacrosse team will be the first to get back out on the field. Playing against Salisbury University on Wednesday night, this is their chance to start it off right.

The last game the team played was almost a year ago, when they faced off against Washington College. The Profs had a season that did not fare so well, but they were prevented from improving their game when it was canceled.

“We didn’t know everything was ending,” Head Coach Lindsay Delaney said. “It’s not what Rowan lacrosse wanted to put out there in terms of performance, but we were super young.”

“We just didn’t have enough time,” Delaney said. “I think if we got to April, you would have seen a completely different team than you saw Mar. 12. I think we needed more time to develop as a unit.”

Dara Hennessy, a senior elementary education major, is a co-captain this season along with Julia Grlica and Ashley Lechliter, also seniors, and junior Gianna Rusk.

For her final season, Hennessy knows it can be the one the Profs turn around.

COVID-19 not only disrupted the entire lacrosse season, but also changed how the team could function.

“COVID definitely impacted us, as far as in the fall when we were practicing,” Hennessy said. “We were limited to the amount of practices we were allowed to have.”

“We were not lifting, so that impacted us as well,” Hennessy said. “We were doing pod practicing in the fall, so you were only working with ten people at a time, and it was never mixing with any groups.”

“We rely on the fall to work out kinks and what not, so that was difficult,” Hennessy said. “Come this spring, we were allowed to do contact. We were all allowed to practice together, but I would say the masks definitely make it challenging.”

The day the team found out that the season was canceled was a day that they had planned to condition and get better at the game.

“I remember that same day, and maybe even a half hour before we were supposed to condition, our season got canceled,” Hennessy said. “I immediately wished for that conditioning.”

This season will be a new team comprised of a younger group, but Hennessy and her co-captains hope to leave the team with lasting effects.

“The co-captains are three of my closest friends,” Hennessy said, “but we’re all very different. We all bring something different to the table.”

“All of our personalities are so different, but I think that’s what makes this work,” Hennessy said. “I think that that’s why we’re very good captains together and leaders, because everyone’s views and perspectives and thoughts on certain situations are different.”

Delaney and Hennessy are anticipating getting back out on the field and starting this season strong.

“It’s going to look different than it has in the past but considering we’re the first to actually be given a season since COVID, I’m so excited to just have a season in general,” Hennessy said.

“I don’t know what the emotions are going to be like when the National Anthem plays and we’re out there together in our uniforms,” Delaney said. “I don’t even know if we can prepare for it.”

The team loss their first game on Wednesday against Salisbury University 16-7. 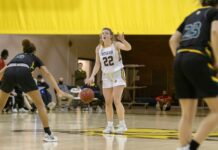 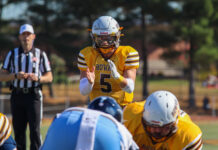