More than 20 groups of South Jersey engineers came together this past week to toss pumpkins across the field behind the South Jersey Technology Park at giant cardboard cut-outs of green pigs, just like a life sized version of the mobile game, Angry Birds.

Rowan’s American Society of Mechanical Engineers (ASME) held its 14th annual Punpkin Chunkin’ this past Friday, Oct. 27. ASME is a student-run group that includes students of every major, not just mechanical engineering. Twenty-one groups competed in the event including Glassboro Fire Department, Glassboro Middle School, and last years champion, Millville High School. There were five preliminary rounds where each team tested out their catapult and made adjustments to improve their score for the next round.

“This is our largest event of the year,” said President of Rowan ASME and senior mechanical engineering major, Brandon Graham.

“It’s a regional event, so we have Universities from the Tri-State Area as well as high schools and technical programs all competing against each other,” Graham said.

The event is used to get students excited about the fun of engineering. It allows for the younger students to look into the engineering program as they go to graduate high school and move on to college.

This year the event hosted a record breaking 21 teams and had more than 450 people in attendance. Last years winners, the students from Millville High School, returned to defend their title as the first and second place winners for the boys and girls team respectively.

“This is the same trebuchet from last year, we just made a couple of modifications,” said senior at Millville High School, Christie Zimmerman.

“I think it took about a month to build, but it was a month of really intense hard work,” she said.

Along with the 21 competing teams, Chunk 58 The Trebuchet, which currently holds the world record for furthest thrown pumpkin, made an appearance at the event. Chunk 58 will be on its way to the large scale Punkin Chunkin competition in Delaware later this year, aiming to its record of 2,500 feett pumpkin toss.

Punkin Chunkin was not the only competitive aspect of the event. They also held a pumpkin carving competition along with a costume contest. Six people participated in the pumpkin contest and were given an hour to create their best jack-o-lantern.

At the end of the event, volunteers took the left over pumpkins and began a tossing them for distance by hand. 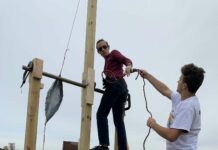